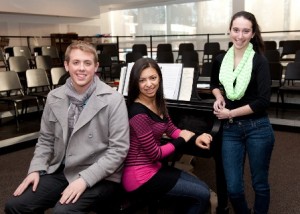 Northborough – Algonquin Regional High School (ARHS) students Andy Hamilton, Priscilla Sena and Jillian Greenspan have been selected to participate in the 2013 All-Eastern Honors Ensembles. Greenspan and Hamilton will sing in the Mixed Chorus, and Sena will sing in the treble-voice chorus.

More than 780 of the most musically talented high school students in the eastern region of the United States have been selected to perform. Nine percent of the students are from Massachusetts.

Amy Collins is the director of Fine and Performing Arts at ARHS.

“The three students will prepare remarkably challenging music that they will perform under the leadership of prominent conductors in this biennial event,” Collins said.

“I’m pleased that these very talented and diligent students will have such a wonderful opportunity to make music at a very high level,” Waters said. “All three are the kind of students who will appreciate this opportunity and make the most of it.”

The 2013 All-Eastern Honors Ensembles will perform for an audience of thousands Sunday, April 7, 2013, at the Bushnell Center for the Performing Arts, Mortensen Hall, in Hartford, Conn. For program and ticket information, visit www.nafme-eastern.org.