Northborough – Could it be that a jar of Jolly Ranchers is the key to connecting well with teenagers? For the last 15 years, Susan Baburins has kept a jarful on her desk in the Athletic Department at Algonquin Regional High School (ARHS) in Northborough. Kids flock by to pluck a tasty candy from the vessel, and most of them inevitably tell her about their day, or about their latest sporting match. Baburins was recently chosen as “Athletic Administrative Assistant of the Year” by the Massachusetts Secondary Schools Athletic Directors Association (MSSADA).

Baburins” constant concern about the student athletes may have been one reason she was picked for the honor, but according to ARHS Athletic Director Fran Whitten, there's a long list of her qualities that likely made her MSSADA's clear choice.

Whitten said everyone in the district knows Baburins, that other athletic directors call her to help with things, and other athletic administrative assistants call her for advice. On the state level, he added, the Massachusetts Interscholastic Athletic Association (MIAA) has asked Baburins to speak at its workshops on administrative assistance. If MIAA is trying a new program or scheduling device, Whitten said, they always ask Baburins to be one of the people who tests it and looks for glitches.

“It was really no contest,” Whitten said about Baburins winning the award. “The important thing is that Susan's really more of an assistant athletic director than a secretary or an administrative assistant. She's really more like an assistant athletic director or a Co-AD. A lot of people in my league will tease me about that and say, “Oh, Susan's the real AD” because she does such a great job and she's always here.”

“It's her personal skills,” he added, “She's wonderful with the kids. The kids come here because they feel comfortable, and in great part it's because Susan's here. Same thing with the coaches. She always makes people feel comfortable so people aren's afraid to ask her questions. They'se not afraid to ask for help because they know she's going to be receptive to their needs.”

Baburins has worked at ARHS for 16 years. During her first year of employment, her job was split between being an administrative assistant for the assistant principal for half the time, and helping in the Athletic Department for the rest. At the end of that year she was given the choice to go full-time in either department. She said working for the assistant principal dealt more with the disciplinary end of things, whereas the athletic office was a place kids liked to come.

Barburins said she participated in sports in high school herself and preferred being involved in that end of things. She shows the students the pride she has in them. After games, she clips out newspaper sports articles and pins them on the bulletin board in her office to flaunt their accomplishments. She attends their tournaments and roots for them.

Thinking back to her own days as a student athlete, Baburins remembers her field hockey coach most.

“I just remember her being very warm, and going into her office and sitting,” Baburins said, “You could talk with her about how your day was, and I kind of feel that kids do that to me too.”

With Baburins catching the ball of caring from her coach, maybe the trend will continue. 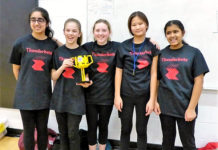