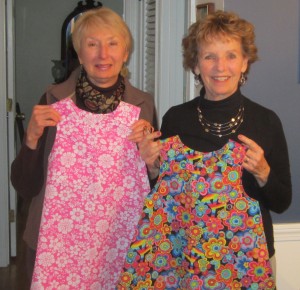 Westborough – At times, everyone has looked at the clothes crammed in their closets and said, “I have nothing to wear.”

Instead of having choices, some people literally have only the clothes on their backs. That is the harsh reality of thousands of children in Tanzania, one of poorest countries in East Africa. But, thanks to a doctor who is committed to helping these children and the volunteers who believe in her mission, including Westborough resident Judy Hall, many young girls in that country's most desperate region will receive the gift of a brand-new dress, lovingly crafted by hand.

Judy and her husband, Dave, live in Florida during the winter months. It was while there last winter that she met Dr. Susan Wilson, the founder of the nonprofit group Tumaini Fund. (Tumaini is Swahili for hope.) Over the past decade, Wilson has traveled on a mission to Kagera, considered one of the poorest parts of Tanzania. There she met dozens of the region's children, many of whom had been orphaned when their parents died from AIDS.

What was particularly heart wrenching was that many of the children, who had already suffered so much, had only one set of clothes to wear. And often, when that set got too worn or tattered, they would not leave their homes because they were ashamed.

One of the initiatives the Tumaini Fund oversees is “Sewing for Hope.” The objective is simple – using a four-piece pattern, volunteers create a simple yet colorful sundress for a young girl. ?Those dresses are then collected and sent to a collection site in the Guernsey Islands and then onto Kagera.

After hearing Wilson's story, Judy was inspired to participate in Sewing for Hope, she said. And after only a few months, the idea has spread throughout Westborough and beyond.

“The response has been great,” Judy said. “Because the dresses are so easy to sew, almost anyone can make them.”

Barbara Stone has helped Judy spread the word about the program to various church groups and other organizations including the Rotary Club of Westborough and the Westborough Woman's Club.

A group at Westborough High School, Women to Women, International, has also indicated it wanted to help. That particular organization, led by junior Tess Mitchell, has the goal of helping struggling women in other countries. But there was only one problem, Judy said, after she met with the girls: None of them knew how to sew.

“They don's have home economics like we did,” she laughed.

That obstacle, Tess said, did not deter the girls from their commitment.

“We can help cut out the patterns,” she said. “We are also going to try to get fabric donations. ????And some of us would like to learn how to sew, too.”

There are many, Judy said, who, like the girls, do not know how to sew, but want to help anyway. For example, she said, her husband, Dave, and Barbara's husband, Dick, have both helped to cut patterns.

When someone signs up to make a dress, the volunteer is given a packet with a pattern and detailed instructions. That person must purchase the fabric, but because the dresses are so simple, it is not a big expense, Judy said. A fabric that is 100 percent cotton or a cotton blend is best. Although the dresses can be bright and colorful, they cannot have any extra adornments on them because the girls have no tools, such as a needle and thread, to repair them.

The beauty of this program, Judy said, is there is no deadline. Sewers may work on it whenever they want.

Barbara recalled a story she heard Wilson relate at a gathering.

“She saw a little girl closely checking a dress she had gotten,” she said. “Susan thought something was wrong with it. But when someone asked her what the matter was, the little girl simply replied, “They must love us a lot.””

“We often feel overwhelmed, like a problem is too big for us to make an impact,” Barbara added. “But as Susan said, if you can make six dresses, you can change six lives.”