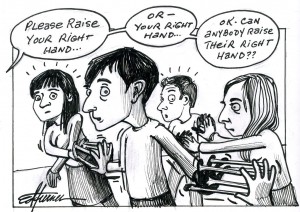 Westborough – When protesters held a sit-in inside the TransCanada Corporation's regional headquarters on Turnpike Road last week, the eight young men and women were chained together at the waist and feet, and their hands were Superglued together.

After attempts using bolt-cutters and even the Jaws of Life failed, a locksmith was called in from Framingham who was able to remove the ankle chains. The protesters were still chained at the waist when police removed them from the site.

The protesters were objecting to TransCanada's Keystone XL Pipeline, a project they claim should be stopped for environmental reasons; it is currently under construction from Alberta, Canada, to the Gulf of Mexico, and will transport “oil sand” into the United States.

While the protest was successful in raising local awareness about the project, it also had a down side. According to prosecutors, in addition to being charged with trespassing and disorderly conduct, the eight will also face paying “a considerable amount of restitution.”