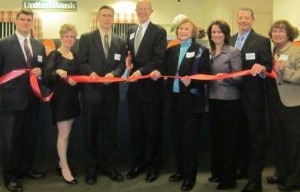 Northborough – State and local officials, along with representatives of the Corridor Nine Area Chamber of Commerce joined executives and employees of the United Bank on Jan. 15 to celebrate the grand opening of the bank's new 6 Church St., Northborough branch.