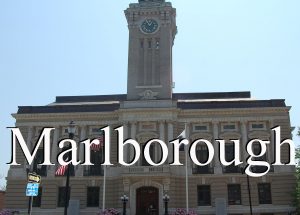 Marlborough – The Marlborough Fire Department released this statement this evening:

The first incident was fire alarm activation at 7:45 AM from the Dow Chemical plant at 455 Forest Street. The initial report was for a faulty ductwork smoke detector, then another alarm from that area of the building came in and the sprinkler system activated. Engine 1, Engine 2, Rescue 1, Tower 1 and Car 2 responded on the initial alarm, Engine 3 was designated as the rapid intervention company. The box was struck when the fire was confirmed by Engine 2. Car 1 also responded to the scene and took command. Off duty personnel recalled when the box was struck staffed? the Department's reserve apparatus. The fire was extinguished, the sprinkler system was shut down and the area was checked to make sure the fire was extinguished.

The box was recalled at 9:26 AM.? The Department's Fire Investigation Unit determined the cause to be accidental. Initial damage estimates were placed at $100,000 but could go higher.

The second incident occurred at the Strange Brew store at 416 Boston Post Road East. The caller reported a smoke condition inside the building at 1:36 PM.? Engine 3 had been detailed to another call and was diverted to the fire, the Lieutenant on Engine 3 reported fire coming out of the exterior wall and ordered the Box to be struck. Engine1, Tower 1, Rescue 1 and Car 2 responded with Engine 2 as the Rapid Intervention Team. Off duty personnel recalled when the box was struck staffed the Department's reserve apparatus.

The fire was extinguished and the area checked for hidden fire. Due to possible exposure to food in the restaurant next door and the grains used for home brewing at Strange Brew, the Board of Health was called along with the Code Enforcement and the Building Department. The box was recalled at 3:20 PM. The fire is being investigated by the Department's Fire Investigation Unit. Damage estimate was unavailable at the time this press release was issued.