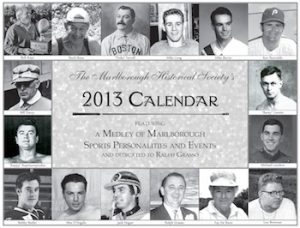 The January page profiles Richard Busa, who began running at age 53 and has raced over 70 marathons nationally. Now 83, he still resides in Marlborough, Kane noted.

For February, the calendar includes Bobby Butler, who displayed potential locally before being signing with the National Hockey League's Ottawa Senators. He now plays for the New Jersey Devils.

“Bobby played five years at Marlborough High School (MHS),” Kane said. “He started when he was in the eighth grade.”

With a boxing theme for March, Kane spoke of an impressive fight for Alec D”Angelo in the 1930s at Marlborough's Lyonhurst Ballroom.

“Alec fought three one-rounders and won every one of them by knockouts,” he said.

April features baseball player Kenneth Reynolds, a MHS graduate. While in college, he was drafted by the Philadelphia Phillies, and later played with other major league teams. After coaching baseball at MHS for many years, Reynolds retired and still resides in Marlborough.

May spotlights soccer player Mike Burns, who was named Massachusetts High School Player of the Year in 1987. He competed in the 1992 Olympic Games in Barcelona.

“He was the captain of the U.S. Olympic hockey team, so that tells you he was well-liked and a leader,” Kane said.

“Economically, it was a big benefit for Marlborough,” Kane said. “All those pros and their caddies ate at all the restaurants, stayed at the hotel – at the time, all we had was the Holiday Inn, believe it or not!”

Baseball is revisited in July with Duke Farrell, known as the “Duke of Marlborough.” Farrell Field at Sawin Street was named in his honor.

“Duke Farrell was a major league catcher, and he played for 18 teams in his 18-year career,” Kane said.

“Jack came out for the race and all of a sudden, there were all these girls screaming and yelling his name – it was a fan club,” he relayed. “He was all of 16 years old at the time. You could see him blushing out there on the track!”

September hails the Shamrocks, the minor league football team owned from 1978 to 2007 by Bob Kays. The team won the National Championship six times.

“The Shamrocks put Marlborough on the map!” Kane cheered.

For October, the calendar returns to the Marlborough Country Club, where golfer Fay Deruvo won 28 championships.

For a listing of local businesses where the calendar is available, visit HistoricMarlborough.org; click “Society Merchandise.”