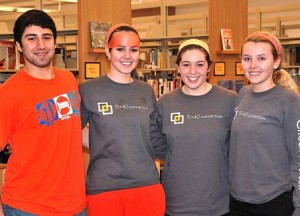 Northborough/Southborough – The 15-40 Connection is a nonprofit organization, based in Westborough, with the mission to raise awareness that the cancer survival rate of teens and young adults hasn's improved for over 35 years. One of the ways the group is promoting the importance of early detection is by helping to form clubs in high schools and colleges. Last school year, Algonquin Regional High School (ARHS) in Northborough started a club prompted by a concerned student, Stephanie Madigan, who is now a senior.

“It's a very important movement because my generation often feels invincible,” she said. “If you feel that something is wrong, then you should go check it out and not be afraid to do so.”

When she asked Kim Honey to be the faculty advisor, the request was accepted for two main reasons.

“First, Stephanie is certainly passionate about whatever she takes on,” Honey said. “I personally knew nothing about 15-40; but knowing Stephanie's personality and how she researches things, I had no reluctance to say okay. Also, all of the kids she brought into the fold are wonderful.”

The faculty advisor also has a personal reason for wanting to be involved.

“Like everybody else, I know people with cancer,” she shared. “I have a friend who didn's do the early detection, and she's now fighting for her life. I think that's why doing this is important for me – to get the message out.”

In October 2012, the club hosted an “Orange Out,” encouraging students to wear the color to call attention to cancer awareness. Club members also distributed orange wristbands emblazoned with a simple, yet potentially life-saving, message: “Check yourself.”

An “Orange Out” was repeated Feb. 4 in observance of World Cancer Day. Activities once again got students curious and discussing cancer concerns among their age group, Madigan noted.

“We should acknowledge it everyday, but it's important to have one special day when we can open our eyes to it,” she said.

In addition to a sold-out bake sale to benefit the 15-40 Connection, the club invited three speakers to address mostly sophomores during health classes. The club president was glad to spread the message to underclassmen, who can continue the effort after she and the other seniors graduate.

Sandy Foster, the education and events manager at the 15-40 Connection, assisted the students with arranging the day's activities.

“If we really want to see a change in cancer survivor rates in this demographic, then we need members of this demographic conveying the message peer to peer,” she said. “That's how you'se really going to get young people considering that they have power to be proactive about their health.”

Personal experiences were shared with students by speakers who regularly meet with clubs at high schools and colleges.

“This exceptional group of people addresses the issue in a slightly different way, recognizing that early detection is a part of the journey they want to reflect back to audiences,” Foster said. “We need attention paid before a diagnosis.”

Foster also spoke to the students about knowing their normal state of health; being prepared to act when they notice a change; and advocating for themselves.

It's a message Foster believes the ARHS students understand and are relaying with others.

“My goal is that being aware, being empowered, and being proactive about their health just become part of the culture here,” she said.