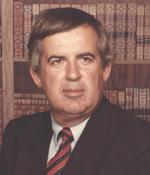 Marlborough – Thomas J. Hill IV, 75, a long-term resident of Marlborough, passed away Friday, March 8, 2013 at his home after a courageous battle with cancer. He was the loving and dedicated husband of 35 years to Bonita S. (Mulligan) Hill.

Born in Millbury, Thomas was the only child of the late William S. and Mary A. (McArdle) Hill. He attended St. John's High School in Shrewsbury, as did three of his sons, and earned his Bachelor of Science degree in electrical engineering at Worcester Polytechnic Institute in Worcester. He also served as a lieutenant in the United States Army.

Thomas had a brilliant mind and was known for his incredible work ethic. He rarely missed a day of work and continued working until his early seventies. He started his illustrious career at Radio Corporation of America (now Lockheed Martin). At RCA, he began what would be more than a 40-year involvement with the United States Air Force intelligence community. He evaluated and assessed Soviet intercontinental ballistic missiles early warning radar developments.

Following his time at RCA, he went to work at Textron Systems. In his 30-year career at Textron, his primary technical responsibilities revolved around threat definition for both US and foreign ballistic missiles and satellite systems. He was a program manager or lead technical manager for all Textron Intelligence programs.

In 1994 he joined CENTRA Technology, Inc. (formerly Defense Group Inc.). He hosted several Russian and Chinese scientists to various US facilities. He traveled extensively and visited many of the leading edge laboratories in Russia (the former Soviet Union) and China.

Beyond his commitment to his career and his family, he was passionate about politics. He became actively involved in local politics upon moving to Marlboro in 1964. He served as president of the Young Democrats (1965-1969), president of the Democratic Club of Marlborough (1969-1972), and had been an active member of the Democratic City Committee since 1970, serving as its chairman for many years (1985-1994 and 1998-2010). In 2011, he was named a recipient of the Democracy in Action award for his significant contributions to the Democratic Party. He was a mainstay at the annual Labor Day parade; one of his most favorite events that he always attended with his family in tow.

Thomas was a character. He had a quick wit and an extraordinary sense of humor. He was coined “Mr. Christmas” at his workplace for wearing red and green pants and Christmas tree ties during the holiday season. He attended Easter Mass wearing pastel patchwork pants and loved to wear his full-length red fox coat to run errands, much to his family's chagrin. His most recent prized possession was a Calvary hat that was a gift from his colleagues at CENTRA Technology, Inc. His sense of humor was evident in his annual April's Fool article that he wrote for the Main Street Journal where he was a columnist for more than a decade.

Thomas was a life-long fan of the New York Yankees and was often seen wearing his favorite teams” apparel. His heart belonged to the Yankees and he referred to the team as his “forever team.”? He was also an avid bargain shopper and took great pride in getting a deal and sharing his accomplishments with his family.

In lieu of flowers, please consider making a donation to Boys Town, one of Thomas” favorite charities that he supported since he was a young man.