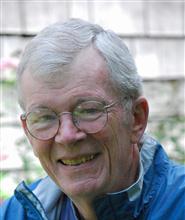 He is survived by his wife of 48 years, Diane Grandin, and his daughter, Jennifer MacNeil; son-in-law, David MacNeil; and his son, Joel, his wife Michelle, and four grandchildren, Benjamin and Matthew MacNeil, and Mia and Henry Grandin. Hartley is also survived by his brother, John, and family of Wakefield, Rhode Island, as well as his sister-in-law, Carol Smith, and her extended family in Massachusetts and Maine.

Hartley was the son of the late Reverend Hartley T. Grandin Sr., former pastor of the First Baptist Church in Holden, and Ruth Grandin. He graduated from Holden High School, and subsequently received both Bachelor and Master's degrees in Mechanical Engineering from WPI in Worcester.

After working at Reed Rolled Thread Die Company in Holden, he joined the faculty at WPI, where he taught from 1957 until his retirement in 1996, with only a break to complete his Ph.D. in Mechanical Engineering at Michigan State University, where he also taught while working on his degree. At WPI, he was the recipient of the Outstanding Educator and Teacher Award.

Hartley was a dedicated and consummate teacher, with expertise in strength of materials and finite element analysis, and wrote two textbooks on the latter topic. He was also a master craftsman who could work wonders with wood and loved to repair machinery. He was particularly proud of the Farmall Cub tractor he had restored in recent years.

In addition to all his professional accomplishments, Hartley always valued a good, hard day's physical work, be it chopping wood, at 14 delivering ice and furniture for his uncle in Missouri, designing and building homes with his brother in Rhode Island, working on a farm, spending summers with his family living without electricity and growing their own food at their home on Glebe Road in Westmoreland, N.H.

He will be remembered as a loving husband, father, and grandfather, a caring teacher, a multi-talented craftsman, and educator, who treated everyone he met with respect and kindness.