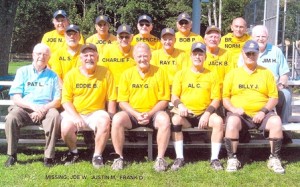 Shrewsbury – The Shrewsbury Seniors Softballers are now seeking new members to join the team this spring.

Player/ Manager Ray “The Man” Gouley said the team is looking forward to a strong season after it “finished last season by winning the last three out of four games either by big scores or come-from-behind wins.”

“Our games begin May 1. Most games are in Shrewsbury, Marlborough and Worcester,” player Pat Lento said.

“Our players are from Shrewsbury, Westborough, Northborough and Grafton,” he added. “The roster is made up of players with an average age of close to 70 with a few players in their early 60s and even a few in their early 80s.”