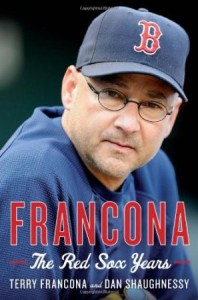 Westborough – Dan Shaughnessy, the co-author of “Francona: The Red Sox Years,” will be at Tatnuck Bookseller this Saturday, April 6? from 2:30 to 4:30 p.m. to sign copies of the book that has all of Red Sox Nation buzzing.

Shaughnessy, an award-winning Boston Globe columnist, had unlimited access to Terry Francona as the former Red Sox skipper reminisced about his eight years as manager of one of the most storied (and at ?times what many called cursed) franchises in all of sports. This book, co-written with Francona, details everything from the dizzying highs of the team winning two World Series championships in 2004 and 2007 to the low of the manager being let go at the end of the 2011 season.

Tatnuck Bookseller is located at 18 Lyman St., Westborough.? The event is open to all.