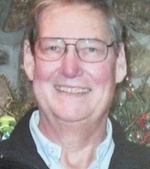 Ashburnham – Clifford Alan Bauer, 67, passed away peacefully, surrounded by the ones he laughed with, lived for, and loved, Friday, April 19, 2013. Born in Chicago, Illinois, he was the son of the late David and Mary Louise (Robertson) Bauer.

He leaves his wife of 46 years, Candace (Buffington) Bauer; his daughters, Kimberly Anne Harvey of Hopkinton and Kristen Jo Arnold and her husband, Andrew, of Westborough; his son-in-law, Steven Harvey of Hopkinton; seven grandchildren, the absolute light of his life, Lauren, Lindsay and Paige Harvey and Taylor, Drew, Dylan, and Tanner Arnold; his brother, Myron and his wife, Myrna, of Franklin, Nebraska; his father-in-law, Henry C. Buffington of Cranston RI; his sister-in-law, Christine Spirio of Framingham; and two nieces, Brooke Spirio and Meredith Quebec. He was predeceased by his mother-in-law, Alice Buffington, and his sister-in-law, Selma Bauer.

Alan grew up in Elgin Illinois and graduated from Larkin High School, where he was an accomplished athlete. He was a graduate of William Penn University, where he excelled in football and baseball, and was an active member of the Sigma Phi Sigma Fraternity. He earned a Master's Degree from Springfield College and enjoyed an early career as director of YMCA's in Illinois, New York, and Massachusetts.

He became involved with the wire and cable industry working for U.S. Steel and James Monroe Wire and Cable, and was the founder and President of Badger Wire and Cable of Fitchburg. He was a former member of Oak Hill Country Club.

He lived in Westborough for 20 years before relocating to Sunset Lake, Ashburnham, where he was currently serving as President of the Far Hills Association, an association he valued greatly and devoted hours to maintaining its integrity and advocating for its members.

He was member of the First United Methodist Church in Westborough and a youth leader for the MYF group for several years.

The family would like to express their sincere gratitude to the members of the Ichabod Washburn Hospice and the many friends that traveled near and far to visit him and share their memories. Their dedication was a heartwarming blessing to the entire family. We thank God for the gift of his life and the blessing of the time we spent with him.