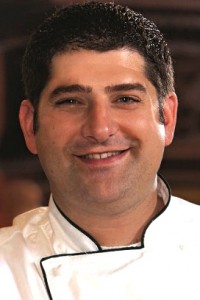 Shrewsbury – Shrewsbury native Matt King is the national director of culinary development and corporate chef for Smith and Wollensky restaurants. He is also executive chef for Boston restaurants Boston Atlantic Wharf and Boston Back Bay.

King began cooking at the age of 8. Both of his parents worked full time, leaving him plenty of time after school to leaf through his mother's Time Life cookbooks. The series features cookbooks with recipes from different countries. King made his cooking debut with a recipe from the Italian cookbook – chicken with prosciutto and fontina cheese.

“Even at this early age I just knew that cooking felt right to me,” said King, and he never looked back.

After graduating from Shrewsbury High School in 1994, King attended the Culinary Institute of America in Hyde Park, N.Y. Over the next few years, King cooked for two presidents and many foreign dignitaries and catered for U2's Bono, The Dali Lama and Elton John. He worked at restaurants in Florida and New York and moved to Ireland, where he opened a cooking school and a restaurant, Benjamin's of Boston.

In 2010, King took over as executive chef for both Boston Atlantic Wharf and Boston Back Bay. There, he enjoys preparing meals suitable for the seasons.

“I like to keep it a bit lighter in the summer,” King said. “Right now I am launching a new tuna preparation that is rubbed with coriander and served with pickled radishes and a jalapeno-lime emulsion.?The spice of the jalapeno is balanced by the acid in the lime and the coolness of coriander and cilantro.”

While King is a well-recognized chef in his own right, he has a host of fellow chefs whom he admires, including Gordon Ramsay, Thomas Keller, Daniel Boulud and Feran Adria. His favorite cookbooks are Grey Kuntz's “Elements of Taste” and “El Bouli” by Feran Adria.

As executive chef, King oversees virtually every aspect of the daily operations of the kitchen, from planning menus to ordering ingredients. And, although he finds satisfaction in preparing a variety of quality culinary dishes, he admits to having favorites.

“Honestly, I love to cook anything, but my favorite foods are anything with foie gras (a food product made of the liver of a duck or goose that has been specially fattened),?a perfectly seasoned steak and a glass of great cabernet.?I love our Smith & Wollensky Private Reserve Meritage; it's the perfect complement to one of our prime dry aged steaks.”

King has a hands-on approach to cooking, and finds his inspiration in a rather unconventional way.

“Growing up, children are told not to play with their food.?I live my life the opposite, telling them to always play with their food. The reality of the life of a chef is that, for every great dish you come up with, you will fail a dozen times,” King said. “Don's be disillusioned that you will come up with something that has never been done before. People have been cooking since the dawn of man and it has probably been tried before. You can just hope to add your own signature.?My rule of thumb is to stay true to classic techniques – they'se have been proven to work, that's why they'se become classics.”

According to King, much of the modern molecular gastronomy (the scientific discipline that studies the physical and chemical processes that occur while cooking) is toning down. As a result, he believes that chefs will be going back to the classics.

When he is not cooking, King said that he spends as much time as possible with his wife, Shauna, and his daughter, Abby.?He and Abby love to cook together and make something fun for dinner every Sunday.

King has this advice for home enthusiasts: “Have fun and relax – after all, it's just food! If you start with great ingredients, it will never be that bad.”

“I could never imagine doing anything else with my life,” he said.