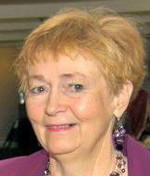 Shrewsbury – Patricia A. (Dauginikas) Cronin, 70, of Shrewsbury, died Friday, June 21, 2013 in Mass General Hospital in Boston after an illness.

Patricia was born in Worcester, daughter of the late B. Thomas and Helen (Gabree) Dauginikas and has lived in Shrewsbury for the past 70 years.

Growing up in Shrewsbury after the Great Depression, her parents surrounded her with love and family- from grandparents, to aunts, uncles cousins- they were all close knit and also instilled in her the value of a dollar and how to bargain shop!

For the most part, Patty was the perfect child but there were instances when the mischievous side out of her came out – like when she “borrowed” her father's car with her childhood friend Rita and got it stuck in a ditch or when they smoked cigars and became sick from them!

As a child she survived both spinal meningitis and the Worcester Tornado of 1953- two very rare occurrences which proved to be a true testament that she always bounced back from tragedy.

Strong will, strong minded and a bit stubborn, Patty was never afraid to speak her mind, a character trait that she inherited from her mother Helen and her beloved father Tommy. This trait was certainly also passed to her children and grandchildren- it could be coined the “Dauginikas way”!

Growing up an only child could have been lonely for some but Patty was surrounded by wonderful cousins on both her mother's and father's side of the family. Her cousin Denise and her were particularly close as they grew up, got married, raised children and went through life together.

Patty was a graduate of Shrewsbury High School and Worcester Junior College. After college she worked for numerous companies and became a successful Relator working for real estate companies including Century 21 and Coldwell Banker.

We will always remember mom's handmade nightgowns and beach cover ups that she made for herself and Elizabeth and Anne.

When her daughters were younger she made all of their clothes from Christmas outfits to everyday clothes – always matchy matchy outfits! Her famous shopping trips to G.W., Spags, Ocean State Job Lot, Christmas Tree Shop and her love of yard sales were legendary!

She lived in Shrewsbury all her life but held a special place in her heart for the city of Boston- dreaming one day about living in a Brownstone along the Charles River. When her daughters were in high school she would take them to Boston for shopping trips to Bloomingdales and Filene's Basement as well as the jewelers building in Boston where she influenced the girls with her love of jewelry.

The beach was another one of her favorite places. Walking the shore line barefoot with the sea breeze in her hair would always put a smile on her face. She would always tell us that the salt water would cure everything- I mean EVERYTHING! Month long summer trips to the Cape would mean family time for her- enjoying the kids and the beach, clam cakes and ice cream but when the movie JAWS came out in the movie theaters, it scared her daughter Anne-mom knew exactly how to reassure her that sharks couldn’t come to shore-she lied to her. She told her that there were big fishing nets out in the water that prevented sharks from coming to shore and that the jetty's anchored the nets. Anne of course believed this because mom never lied and only found out as a young adult that this wasn’t true lol 🙂

Was mom ever on time? Heck no – that is the long standing joke. Did it drive her family crazy – yes 🙂

She had an uncanny ability to talk to anyone and everyone she met. We could be in a grocery line and she would just start talking to the customer in front of her like the person was her long lost friend. She saved EVERYTHING and treasured it all! And more importantly EVERYTHING had a story that went along with it.

Her grandchildren Jesse and Taylor were the light of her life. She was there for them since birth always singing Tora-Laura-Laura to get them to sleep or calm them down. One time when Jesse was little he cut his head after thinking he could fly at daycare- she brought him to the emergency room for stitches and instead of the Novocain to numb him and calm him down, all he needed was her to sing Tora-Laura-Laura to him. She dedicated the later part of her life to raising both Jesse and Taylor.

She also dedicated the last twenty years to caring for her aging parents. The death of her father in 2002 was particularly hard on Patty,after all he was her rock- the glue that held the family together. We all said she was never the same after grampa died but through that pain and void of her father, came a stronger relationship with her mom. Even though her mom had Alzheimer's, Patty would visit the nursing home every single day, many times twice a day just to be by her mother's side. Grant it, this was not the traditional way to strengthen a relationship but Patty didn’t care she was convinced that grammie knew that she was there. Four months ago, Patty's mom passed away on February 15th after a thirteen year battle with Alzheimer's.

If there is ever a legacy to leave, I would say it is found in number of lives one has touched and affected. Over the past few days, we have been overwhelmed by the amount of people who have reached out to tell us what an impact our mom has made on their life. From lifelong neighbors, to the pharmacy technician's, her doctor's, to childhood friends and her family- everyone has a story and a cherished memory to share.

The one common thought was that Patty was invincible and would bounce back like she did all those other times. The only comfort we have is knowing that she is reunited with her dad and mom in heaven.

Relatives and friends are invited to visit with Patricia's family Wednesday, June 26, from 6 to 8 p.m., in the Britton-Shrewsbury Funeral Home, 648 Main St., Shrewsbury. A prayer service celebrating Patricia life will follow at 8 p.m. Burial will be at a later date in Mountain View Cemetery, Shrewsbury.