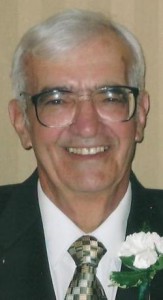 Shrewsbury – Robert A. Morello, 86, of Shrewsbury, passed away Saturday, June 22, 2013, in Millbury Healthcare. He served his nation proudly during World War II in the United States Navy.

He is survived by his loving wife, of 59 years, Eleanor B. (Olson) Morello; three daughters, Robin Born and her husband Joseph of Indianapolis, Ann Morello of Harwich, and Christine Crawford and her husband Brian of Nashua, N.H.; a sister, Mary Raymond of Worcester; two grandsons, Daniel and Christopher; and many nieces and nephews. He was predeceased by three brothers and three sisters, Michael, Joseph and John Morello and Helen Esip, Julia Scalzo and Rita Limoli.

Robert was born in Worcester, son of the late Michael and Christine (Scarcello) Morello. He grew up in Worcester and graduated from Worcester Commerce High School. He later graduated from New England School of Accounting and received a Bachelor of Arts Degree in Business from Clark University. He and his family settled in Shrewsbury in 1970.

Robert worked in the customer service division of Wyman-Gordon Company in North Grafton for 37 years, retiring in 1988. He was member of the Church of Saint Mary in Shrewsbury, where he attended daily Mass, the East Side Post 201-American Legion, and the Shrewsbury Senior Center. He enjoyed golfing, travel, jazz music, and visiting the YMCA on a daily basis.

Calling hours for Robert will be held Tuesday, June 25, from 4 to 7 p.m., in the Mercadante Funeral Home & Chapel, 370 Plantation St., Worcester. His funeral will be held Wednesday, June 26, from the funeral home with a funeral procession to Saint Mary's Church, 640 Main St., Shrewsbury, where Mass will be celebrated at 10 a.m. Interment will follow in Mountain View Cemetery, Shrewsbury.

In lieu of flowers, donations in his memory may be made to the Shrewsbury Senior Center, 98 Maple Ave., Shrewsbury, MA 01545.