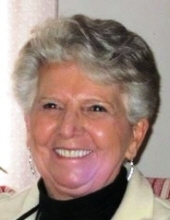 Northborough – Shirley A. (Mangan) Hart, 80, of Shrewsbury, formerly of Northborough, died Saturday, June 22, 2013 at St. Vincent Hospital in Worcester after a short battle with cancer. Her husband Robert W. Hart died in September 2011.

Born in Clinton and raised in S. Lancaster/Clinton, daughter of the late Thomas and Bertha Mangan, Shirley graduated from Lancaster High School in 1950. Before her recent move to Shrewsbury, she had lived in Northborough since the mid-1950s.

She worked at the former Chase Paper Co. in Westborough for many years until her retirement in 1995. She was a founding member of St. Bernadette Parish and was active in the Adoration Society. Her hobbies included tole painting, crafts, traveling, and cooking, including her famous golabki and baklava.

Shirley loved being in the water, especially at Hampton Beach. She will be remembered for her wonderful laugh, colorful attire, and her thoughtfulness towards everyone she knew. She was also a sports enthusiast, and took great pleasure in watching her children and grandchildren play in their many games over the years. She was a wonderful mother and her family meant everything to her.

In lieu of flowers, memorial donations may be made to St. Bernadette Parish, Building Fund, 266 Main St., Northborough, MA 01532.