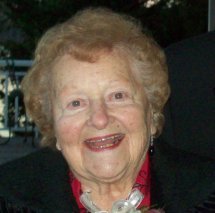 She leaves her children, Thomas P. O”Connor and his wife Diane of Shrewsbury, Diane E. Russ and her husband Chet of S. Yarmouth, Kathleen A. Peterson of Westborough, Maureen P. Mahoney and her husband Scott Forrest of Westerville, Ohio, and Elizabeth A. Whitmer and her husband Ed of Ft. Myers, Fla.; 14 grandchildren; and several great-grandchildren.

Besides her husband, Wanda was predeceased by two sons, James M. O”Connor in 1981 and John J. O”Connor in 2012, and her seven siblings, Albina, Michael, Walter, William, Chester, Edwin, and Joseph.

Wanda was born and raised in Worcester, daughter of the late Michael and Lizzie (Browko) Kowaleski. She graduated from Commerce High School in 1939.She moved to Shrewsbury in the early 1950s.

She was a member of Saint Mary's Parish in Shrewsbury and the Shrewsbury Women's Club, Past President of the TOPS Club in Worcester, and enjoyed volunteering her time for many local associations.

Wanda was a talented homemaker and seamstress and had made many sets of draperies for her family and friends throughout the years.

Her funeral Mass will be celebrated June 25 her parish church of Saint Mary's in Shrewsbury, with burial in Mountain View Cemetery.

Donations in her memory can be made to Metro West Homecare and Hospice, 85 Lincoln St., Framingham, MA 01752.