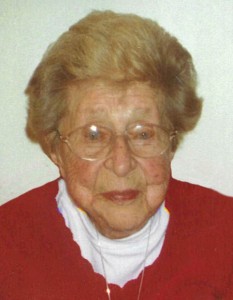 She is survived by her daughters, Dorothy E. Mongeon, wife of the late Ralph K. Mongeon, and Judith A. Brousseau, wife of Robert J. Brousseau, all of Shrewsbury; her loving grandchildren, Cheryl Mongeon, Lori Taylor, Elisa Green and her husband David, and Kenneth Mongeon and his wife Tanya, all of Shrewsbury; and six adoring great-grandchildren, Kelsi Taylor, Alexis Green, Jenna Taylor, Kealan Green, and Connor and Owen Mongeon.

Grace was born in Boylston, the daughter of the late Lorenzo and Edna (Seaver) Dean. She attended Boylston elementary schools, later graduating from North High School in Worcester and Salter Secretarial School.

Grace was a member of the First Congregational Church of Boylston, the Boylston Grange, and the National Grange, and volunteered in the Media Centers at both North Shore, and Coolidge Schools in Shrewsbury. She helped raise the first flag at Dean Park at its opening ceremony in 1913.

In her spare time she loved to knit, and crochet, square dance, and go to Dinky's for breakfast, and, above all, she cherished the time she spent with her family.

Relatives and friends are invited to attend visiting hours Thursday June 27, from 5 to 7 p.m., in the Britton-Shrewsbury Funeral Home, 648 Main St., Shrewsbury. Her funeral service will be held Friday, June 28, at 10 a.m., in the First Congregational Church of Boylston, 10 Church St., Boylston. Burial will follow in Pine Grove Cemetery, Boylston.

Donations in lieu of flowers may be made in Grace's name to the First Congregational Church, 10 Church St., Boylston, MA 01505.