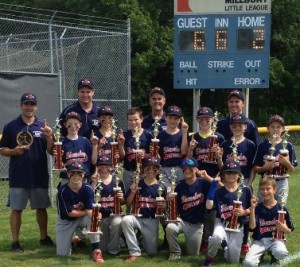 After finishing round robin play with three wins and three losses, the Nationals earned the #10 seed in the 14-team tournament for the championship. They proceeded to win four straight games in single-elimination play to finish with an overall record of seven wins and three losses in the tournament, defeating teams from Millbury, Westborough, Grafton, Quabog, Southborough, Auburn, and Northborough.

Leading the Nationals with an outstanding pitching performance was hard-throwing right-hander Logan Peterson. Peterson gave up two unearned runs, scattering only four hits on 10 strikeouts and one walk over 5 2/3 innings. After Peterson reached his pitch count limit, left-hander Tyler Mudd came in from his usual centerfield position to pitch and get the last out to earn the save.

Ryan McAulay was named the tournament's “Most Valuable Player” for his outstanding pitching, hitting, and fielding throughout the tournament. Speedy centerfielder Tyler Mudd received the “Most Outstanding Hustler Award.”