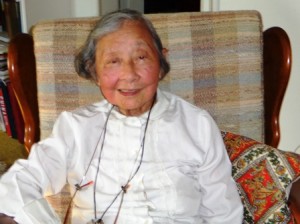 ?Shrewsbury – Isabelle Chang has been announced as the Grand Marshal for the 17th annual Spirit of Shrewsbury Fall Festival.

A resident of Shrewsbury for over 60 years, the former Isabelle Chin grew up in Boston, the daughter of an import/export tea merchant. One of nine children, she was the fifth child in a bustling household.

Isabelle met her Chinese-born husband Min Chueh Chang in 1948, shortly after he moved to the United States, in the library of Yale University, where she was studying to get her master's degree.? After their marriage, she assumed the role of housewife, allowing M. C. to delve into his work, which included his collaborative inventing of the birth control pill and in-vitro fertilization at the Worcester Foundation for Experimental Biology, on Maple Avenue, for which he became world-renowned. They had two daughters and a son together, Claudia Chang Tourtellote, Pamela O”Malley Chang, and Francis Hugh Chang (affectionately known as “Poncho”). One daughter and son reside in California and one daughter lives in Virginia. Isabelle is the grandmother of four grandchildren. M.C. passed away in 1991.

Education has been a priority in Isabelle's life.? ?She holds several master's degrees from Yale University, Clark University and Anna Maria College. She has a degree in library science from Simmons College and for many years worked at the Shrewsbury Public Library and the Shrewsbury Junior- Senior High School library. She has enriched and touched the lives of many Shrewsbury students.

Not only has library work been one of Isabelle's passions, but history has also played a major role. The combination of the lure of historical Shrewsbury and history itself inspired her to write a book about Artemas Ward, who was the nation's first Commander-in-Chief before George Washington. The book will be for sale, for $5, at the Spirit of Shrewsbury Oak St. Expo, Senior Center, Town Hall, and Artemas Ward House. All of the proceeds from the sale of the book will be donated to the Shrewsbury School Department.

Her many volunteer contributions to the town of Shrewsbury include:? member of several committees for the Spirit of Shrewsbury Fall Festival, Shrewsbury Historical Society's cemetery tours, and Artemas Ward open house.? Currently she volunteers at the Senior Center as part of the Council on Aging.? At the Senior Center, she is involved in the Writers Club, as well as many groups which include book discussion, current events, and scrapbooking.