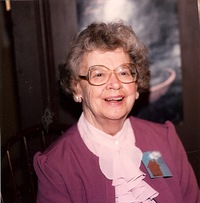 Westborough – Kathryn L. (Hoyt) Maddocks, 104, a resident of West Boylston for more than 60 years, and in recent years a resident of Beaumont Nursing Center in Westborough, went home to be with her Lord and Savior Jesus Christ Saturday, Sept. 21, 2013. She will be greatly missed. Her beloved husband of 52 years, Herman C. Maddocks, died in 1987.

She was a loving mother, grandmother, great grandmother, and aunt, a kind and generous neighbor and friend, always ready to help others.

A 1930 graduate of Mount Holyoke College, Kathryn taught English at the Hitchcock Free Academy in Brimfield. She was married to Herman (Bud) Maddocks April 20, 1935, and they lived in Worcester and Northborough before settling in West Boylston in 1943. They bought a home at 19 Crescent St., where they raised their four children.

In the 1950s, Kathryn began the first nursery school in West Boylston. She ran her pre-school for many years. Later, she worked as a counselor at the Lancaster Industrial School for Girls, where she also coordinated the music programs, worked with the chorus, and played the piano or organ for worship services. She was a member of the Oakdale United Methodist Church.

Kathryn was an accomplished musician, and she loved playing the piano, organ, accordion and harmonica – right up until the last days of her life. She used her musical gifts extensively over the years for the joy of others. She often played for church services. A choral group met in her home for many years, and each week they went to a local nursing home to share their music.

In 2002 Kathryn received an award from the Oakdale Nursing Home for volunteering there for 40 years. Her children and grandchildren would tell you of special memories of falling asleep night after night to the lovely sound of her music.

The family wishes to express their most sincere thanks to all of the staff of Beaumont Nursing Center in Westborough. Their kind and compassionate care for Kathryn over these last seven years is greatly appreciated.

Relatives and friends are invited to visit with Kathryn's family Saturday, Sept. 28, from 10 – 11 a.m., at the Oakdale United Methodist Church, 15 North Main St., West Boylston. A service of celebration of Kathryn's life will follow at 11 a.m. Burial will be private in Mt. Vernon Cemetery, West Boylston.