Northborough – Algonquin Regional High School students and community members recently attended a morning of events centered on the all-school summer read, “Never Fall Down” by Patricia McCormick. Participants heard a Cambodian refugee speak about his experience as a child soldier in the Khmer Rouge, viewed a documentary based on the novel, watched a musical performance, and attended a fair to enrich their reading experience.

The One School One Book program, in its fourth year, requires all students to read one novel that has been selected by a committee of students and faculty. “Never Fall Down,” a young adult novel that chronicles the life of Arn Chorn-Pond, was selected out of 20 potential books because of its relevance to world events today. The goal of the common read is 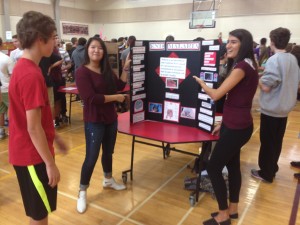 to not only expose students to various subjects, but also to create a sense of community where students can discuss the book among each other and in class.

The secondary goal of reading this year's novel was to expose students to the Cambodian genocide.

“Our hope was that [the message] would be more than just about genocide,” said Brittany Burns, a history teacher at Algonquin. “[We wanted to] send a message about humanity, human rights, [and] the human experience that we all have ownership of in some way or another.”

Cheryl Lewis, a focused study tutor at Algonquin and 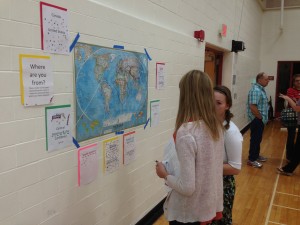 co-chair of the One School One Book committee, said that the program is important to make students aware of current events outside of the United States. Tricia Riley, a business education teacher, was the other co-chair.

The morning of events was jointly organized with the social studies department. Burns found the speaker, Sayon Soeun, through a nonprofit organization in Brookline called Facing History and Ourselves, where she serves on the teacher advisory board.

Soeun was kidnapped by the Khmer Rouge at age 6 and trained as a soldier, which was his occupation until he immigrated to Lowell at age 14 as a refugee. He currently leads an organization which helps at-risk and troubled youth and advocates for juvenile justice reform.

“He was a great speaker??”funny and engaging,” Burns said. She thought that the most powerful part was his message at the end: “We all have issues, but [we] aren's what happened to us, we are the choices that we make,” she paraphrased.

Kayleigh Stone and Lauren Reddington, juniors at Algonquin, both enjoyed the One School One Book event. Stone said that her favorite part was hearing the flute performance by Master Pon, a Cambodian musician from Lowell who is acquainted with Soeun. Reddington found the talk to be inspirational. She said that she “learned to appreciate [what] we have” after one part of the talk stood out to her: learning that Soeun's source of entertainment was watching crickets fight while most Americans today have televisions and phones as constant entertainment.

The juniors and seniors heard Soeun speak in the auditorium while the underclassman watched “The Flute Player,” a documentary highlighting Pond's journey from musician for the Khmer Rouge propaganda band to his current mission training musicians in Lowell and reviving traditional music in Cambodia. The Khmer Rouge killed 90 percent of musicians and artists during the genocide, so Pond strives to work with musicians, spending half of his time in Lowell, and the other half in Cambodia, to restore Cambodian musical culture.

In addition to the documentary, underclassmen attended a Global Issues Awareness Fair where they viewed posters developed by Advanced Placement History students on subjects ranging from environmental issues to global financial organizations to influential women. Students also had the opportunity to sign a pledge for global awareness and mark their heritages on a map. The cafeteria served a Cambodian lunch option, coconut curry chicken and vegetables over steamed rice.

“Instead of just having the book to read, it was one morning to bring everyone together,” Lewis said.

Burns said that the program was “truly a community event this year” as both the Northborough and Southborough libraries screened the documentary for public viewing, and student volunteers from Algonquin's Community Action Program organized a book discussion at the Northborough Senior Center.