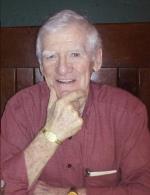 Marlborough – Thomas J. Gilfoy, 81, of Marlborough, formerly of Hudson, died Saturday, Oct. 5, 2013, with his loving family at his side at Marlborough Hospital. He is survived by his wife of 63 years, Virginia “Ginny” (Tompkins) Gilfoy of Marlborough.

Thomas was born in Boston, son of the late Vincent and Annie (MacDonnell) Gilfoy. He was raised in the Mission Hill district of Boston where he attended local schools. He joined the armed services and was a veteran of the Korean War, serving in the U.S. Army until being honorably discharged in 1954.

He was employed by the Polaroid Co. in Cambridge and later in Waltham as a supervisor for 26 years, and later spent five years with the Digital Equipment Corp. in Maynard. He was a life member and past President of the A.O.H. in Marlborough and member and past President of the Hudson Eagles, and also spent time as a crossing guard at the Richer Elementary School in Marlborough.

Thomas enjoyed golfing and photography as hobbies, and in his younger years was a Gold Glove Boxer. He cherished the trips to Ireland and Germany he took with his wife Ginny. Most of all, he loved spending time with his family, especially his grandchildren and great-grandchildren. He will be truly missed by all.

Besides his wife, he is survived by his six children, Virginia M. Adam and her husband Mark of Goffstown, N.H., Kenneth F. Gilfoy and his wife Melinda of Ashland, Patti Akers and her husband Jay of Milford, Thomas J. Gilfoy II of Leominster, Kathy Calderone and her husband Bob of Hudson, and Diane Henry of Shrewsbury. He is also survived by his sister, Anne Marie McIrney of West Roxbury; his brother, John “Sonny” Gilfoy of Falmouth; 15 grandchildren; 18 great-grandchildren; and many nieces and nephews. He was the brother of the late Mildred “Honey” Ricciardi and Donald Gilfoy.

In lieu of flowers, donations in memory of Thomas may be made to the Muscular Dystrophy Association, 33 Lyman St., Westborough, MA 01581.