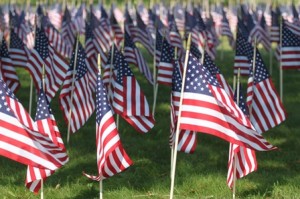 Region – Here is a preview of local Veterans Day events:

The ceremonies will be held at Liberty Park/Wood Square.? This year's featured guest speaker is Naval Combat Aviator, Commander Andrew “Pipes” Plummer, who has over 3,100 flight hours and 369 arrested landings on eight U.S. aircraft carriers. He is now commanding officer of Navy Recruiting District New England Region. Sailors from the USS Constitution and members of the Massachusetts National Guard will also participate.

Marlborough – The parade will start at 10 a.m. in front of the American Legion, 88 Maple St.? and travel along Main Street stopping at monuments along the route ceremony, up to the Civil War monument on Monument Hill, and ending at the WWI monument in front of the Walker Building. The event's guest speaker is Brigadier General Paul G. Smith. Mayor Arthur Vigeant, City Council, and School Committee members will also be in attendance. High School and Middle School bands, veterans, Marlborough Firefighters Honor Guard and Scout troops will also be participating.

Northborough ?- On Monday, Nov. 11, the Vincent F. Picard American Legion Post 234 Color Guard and Firing Squad will join ceremonies in Shrewsbury, then host a luncheon for Post members at 1 p.m. at the post, 402 W. Main St.

Southborough – American Legion Post 161 and VFW Post 3276 will lead a Veteran's Day parade beginning at 10:30 a.m. at the Community House, 28 Main St. (corner of routes 85 and 30). The group will march to the monument in front of the library, where a 20-minute ceremony will include remarks by local veterans and Selectmen. Then parade will return to the Community House.

Shrewsbury – The Shrewsbury Republican Town Committee will host a Veterans Day Community Breakfast to honor our men and women in uniform, past and present, celebrate the completion of the WWI Memorial, and to recognize those who made it a reality. The breakfast takes place Monday, Nov. 11, at the First Congregational Church, 19 Church Road, from 9 to 10:30 a.m. There will be coffee, tea, bagels, and muffins at no charge, but donations are always welcome. Proceeds will benefit the Shrewsbury Memorial Maintenance Fund. RSVP to [email protected] or 508-736-7723.

The ceremony to dedicate the new WWI Memorial will immediately follow at 10:30 a.m. in front of Beal School, 1 Maple Ave.

Westborough – Monday, Nov. 11, starting at 9:30 a.m. ceremonies will begin at the Pine Grove Cemetery and then move onto the Vietnam Memorial, Ruggles Street, Forbes Municipal Building and end at the rotary. At each location wreaths will be laid and a local clergy member will give an invocation or prayer. VFW Post 9013 honor guard will fire three volleys of rifle fire followed by the buglers from the Westborough High School band playing TAPS. The parade grand marshal will be Douglas M. Sulham, a decorated Maritime Enforcement Petty Officer Second Class with the Coast Guard Reserves.