Shrewsbury – Oak Middle School English teacher Derek Pizzuto is, to put it mildly, frustrated. After a series of personnel cuts in Shrewsbury schools, there are less teachers to go around. Less teachers means a higher teacher-student ratio and less time to work individually with students. A lack of teachers also means there's no one to help students produce a yearbook or advise a photography club. And now, student achievement appears to be suffering in Shrewsbury schools.

“We'se at a crisis point where teachers and administrators are doing all they can,” Pizzuto said. “We'se working past the boundaries of what can be. I's seeing more and more teachers looking burnt out.”

As a result, teachers have begun cutting activities such as the school's yearbook. The literary magazine ended last year, Pizzuto said, and so did the photography club.

Pizzuto said Shrewsbury is missing out on creating students with a more well-rounded education. “You cut out all that stuff, and there's nothing left. Education's a lot more than that,” he said.

Sawyer alerted the Shrewsbury School Committee to the problem in his State of the District presentation in September, in which he outlined the problems that come with too-large classroom sizes.

“We'se [exceeded] the guidelines in places before, but never across the board, where you have 29 to 30 students [per class] in the middle school program. There are several classes in the 30-32 range, and that's very troubling to me,” Sawyer said.

“All we have time for is the critical areas?math, science, social studies, English language arts,” said Pizzuto. “Kids are not getting to stretch their wings. And when you'se busy chasing your tail, you can's make greater connections [with students].”

Those connections are important, he said, especially in the sometimes-volatile age group that he teaches. “When dealing at the middle school level, these kids are seething buckets of hormones and insecurities,” said Pizzuto. “You end up spending time putting out fires, instead of helping others move up.”

The quantity and quality of attention a teacher can give to individual students suffers in oversize classes, according to Sawyer, and the physical space is compromised as more students are “shoehorned” in.

As a result, school personnel said that often students unable to get the attention needed from a teacher will act out to get that attention, which then negatively impacts the classroom climate for other children.

Sawyer said he has seen a correlation between class sizes and student achievement. MCAS scores show that students are not improving as well as they should, and achievement gaps in nine out of 11 categories are growing.

“I can's help but think the major variable is that class sizes have increased in the last five years,” Sawyer said. “We'se seeing a trend going in the wrong direction. Results require resources.  If this trend continues, the quality of education is going to deteriorate significantly.”

The School Committee on Oct. 9 unanimously approved its Fiscal Priorities & Guidelines for FY 2015 Budget Development. Its first priority is to bring as many classrooms back in line with the class size guidelines.

“The reason we have higher class sizes is definitely a result of limited budget resources, no question about it,” said Sandra Fryc, chair of the Shrewsbury School Committee. “Would the town add to our resources? That remains to be seen. I hope that's a question that comes up.”

Fryc said that parents of Shrewsbury students are becoming more aware of the problem, and is hoping that awareness will start to lead to a solution.

Sawyer said the trouble stemmed from the economic crises of 2008-2009. The school system was able to fend off layoffs thanks to federal stimulus money. However, the town was not able to keep up with funding after the expiration of those funds and state mandates to fund programs such as special education.

“It's a question of resources,” Sawyer said. “We don's have the money.”

As a result, several reductions in teaching positions were made throughout the district, notably in the 2013 Fiscal Year, where 32 positions were cut, including 16 classroom teachers, 12 support staff, and four administrators.

Some of those positions, including two administrators and special education aids, have been restored since, however, the district was unable to restore and any teaching positions to address classroom sizes.

In January, the district recommended Town Meeting voters approve a $54 million budget, with the hope of restoring cuts made in previous years. However, Town Meeting reportedly approved only $52 million for Shrewsbury schools.

There has been significant investment made in education in Shrewsbury, including equipping students with iPads and construction of the new Sherwood Elementary School.

Sawyer was quick to point out, however, that parents bear a significant portion of the costs of the iPad program, and that the state paid for half of the new school.
“Funding for a project like a building isn's an either/or,” Sawyer said. “That's a separate project outside the operating budget for the schools.”

Pizzuto noted that there was no teacher available to train students to use the iPads, and “we haven's had a computer class in a few years,” he said.

Pizzuto, who lives in Maynard, said he would like to see Shrewsbury residents support a Proposition 2 ? override, but noted that Shrewsbury has a history of defeating such proposals.

“The community has to decide what it values,” Pizzuto said.

Town Manager Daniel Morgado has vowed to again recommend a balanced budget in January 2014, after which a Town Meeting will be held to ultimately decide what residents want to spend on the schools.

“I expect student performance and classroom sizes to be part of the budget narrative,” said Morgado, more so than in previous years.

“We run a pretty tight ship,” Fryc said. “We'se taken a hard look at where we can find resources. After years of doing that, we'se lean. There's no place to go.”

Kimberly A. Taylor has a daughter who attends eighth grade at Oak Middle School. Taylor said it was unclear whether residents would support an increase in taxes to hire more teachers.

“Some would, some wouldn's. I know the majority of parents would, but parents don's make up the entirety of the town,” she said.

Meanwhile, students like Taylor's daughter may be paying the price for the school's lack of teachers.

“She's not getting the individual help and assistance with academics that she needs,” said Taylor, who is also the principal of Charlotte Dunning Elementary School in Framingham. “Kids are not getting the time for extracurricular activities, like the yearbook. Now teachers don's have the time to do the extra activities that are important for social development.” 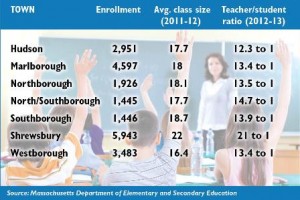