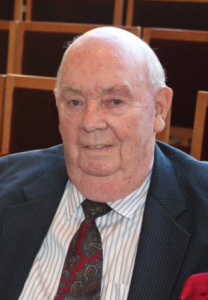 He was born and raised in Hanover, N.H., son of the late Bernard and Frances (Wells) Hosking. He moved to Shrewsbury in 1956, when he began a very long and rewarding career with the Massachusetts Turnpike Authority.

After retiring from the Turnpike Authority, Dick became a part-time driver for Knight's Airport Limousine Service, where his love of conversation and great wit endeared him to his many regular passengers until leaving the company a few years ago.

Dick's world revolved around his family. He was always at his happiest during large family gatherings surrounded by his wife, children, grandchildren and great-grandchildren.

His greatest joy was indulging in the spirit of the holiday season. He also had passions for conversation, politics and his home. He greatly enjoyed dining with his family at many of his favorite restaurants: The Other Place Pub, The Stockyard, and Anthony's Pier 4.