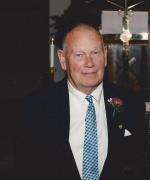 George was born in Malagash, Nova Scotia, son of the late Victor and Elizabeth (Purdy) Davies. He was a WWII veteran, serving in the U.S. Navy until being honorably discharged in 1946. He resided in Waltham for many years before settling in Hudson in 1964.

George had many interests, including gardening, canoeing on the Charles River, and roller skating with his wife Patricia. Most of all, he will be remembered as a kind and devoted volunteer, giving most of his free time to helping others in need.

He is survived by his three sons, Tom Davies and his wife Brenda of Ormond Beach, Fla.; Mark Davies of New Lebanon, N.Y.; and Paul Davies of Destin, Fla. He is also survived by his two brothers, John Davies of Harwichport, Cape Cod and Donald Davies of Hudson; his two loving grandchildren, Leah and Michael Davies; his nieces and nephews; and his devoted friend and caretaker, Julie Boudreau of Hudson.

Funeral services will be held privately at the convenience of the family. Arrangements are under the direction of: Tighe-Hamilton Funeral Home of Hudson.