Northborough – Many Northborough residents learned more about the community service performed by Pat Cluff when she was named grand marshal of this year's Applefest parade. But anyone connected with Proctor Elementary School is most likely aware of her as the founder of Board Game Buddies (BGB), a monthly program that has been pairing fifth-graders with seniors for 15 years.

BGB began when Cluff volunteered while her youngest child was a fifth-grader in the classroom of Joan Dalton, who expressed interest in some sort of intergenerational program. 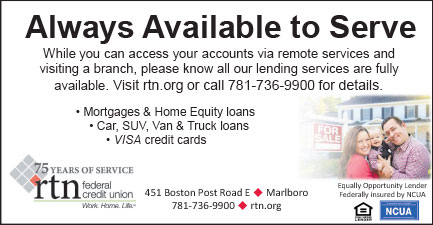 “All I could think of was to have grandparents come in and play board games with the kids,” Cluff recalled. “So we invited grandparents into the classroom to see what would happen.”

What happened was that the other teachers asked if

their fifth-graders could also participate in the program. BGB was moved to the cafeteria, where it continues meeting monthly with games such as chess, Scrabble, Yahtzee, and bingo. It's still the same basic program 15 years later, but Cluff feels it's particularly valuable now.

“The biggest difference from then to now is that I see kids get off the bus with a knapsack full of books, and go inside the house and work on their computers,” she said. “Playing board games is interactive with human beings. Kids don's do much of that anymore.”

Cluff recognizes that the program is beneficial for each generation.

“My grandchildren are in the western part of the state and in Vermont, so this lets people like me come and play with somebody else's grandchildren,” she said. “Many of the people who started the program with us 15 years ago are still coming back.”

Among the dedicated returnees is Mary Dragon, who became involved when her son was a fifth-grader. She continues participating even now that he's a senior at Algonquin Regional High School. Seven years ago, Dragon brought and looked after her parents, who participated as her son's grandparents. Now she brings Cluff to the school each month, and then stays to set up and play games with students

“Mary has been very helpful,” Cluff said. “I have a few health issues that I's watching, so she picks me up each month. She has really been a tremendous help in all kinds of ways.”

Another regular participant for several years is Fran Warren, a retired teacher and neighbor of Proctor School.

“I just love being with the kids,” she said. “This program makes them more aware of the older generation. They might not have realized that we'se compatible and we still want to have fun.”

While Cluff continued as a BGB participant, she passed the responsibility as program organizer to another parent, Diane Campbell, for two years. Now the program is organized by Kathy Andrews, who was looking for a volunteer opportunity. Andrews visited a BGB session when her daughter was a fifth-grader – and she's glad that she did.

“I never really appreciated my grandparents the way that I should have, and I realize now how much wisdom they had,” she shared. “I think it's really great to see these kids learning from the seniors.”

Proctor School hosted a celebration honoring Cluff for her contributions to them and the community.

“It was an amazingly fun day,” Cluff said. “My favorite memory is the warmth and genuine friendship I felt between the faculty, students, and myself.”

“I's amazed and pleased that the program is still running,” she said. “It was such a simple, little idea that we started. All I ever wanted was to come here and have a good time.”