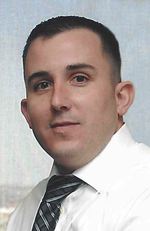 He leaves his fiancée, Kelly Boulay of Shrewsbury; his parents, Michael and Arlene Sullivan of Holland; his brothers; Michael Sullivan and his wife, Lisa, and Patrick Sullivan, all of Worcester; his sisters, Meaghan Sullivan and her fiancé, Ryan McClain, of N. Brookfield, Shannon Metivier and her husband, Bob, of Spencer, and Alyssa Walczak and her boyfriend, Tom Flynn, of N. Brookfield; and his adoring nephews and nieces, Natalie, Jacob, Karra, Andrew, Ryan, and Nathan, as well as aunts, uncles and cousins.

Vin was born in Worcester. He graduated from Tantasqua, and later graduated from Nichols College. He later received his paralegal degree from Boston University. He served his country proudly as a member of the United States Marine Corps.

He worked as an accountant in the president's office for the University of Massachusetts, Worcester campus.

Vin was an avid skier and outdoor enthusiast, whether it be winter or summer; he was an avid runner, he enjoyed, kayaking, gardening, and water sports and spending time on the beach, building fires, and enjoying fine wines.

Vin had a zest for life, and a powerful impact on those who knew and loved him. He will be missed.

Relatives and friends are invited to attend visiting hours Monday Dec. 23, from 4 -7 p.m., in the Britton-Wallace Funeral Home, 91 Central St., Auburn. His funeral Mass will be held Tuesday, Dec. 24, at 10 a.m., in Our Lady of Mount Carmel-St. Ann Church, 28 Mullberry St., Worcester. Please go directly to church. Burial will be held privately.