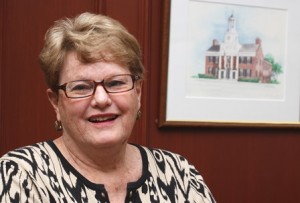 Westborough – If you’ve lived in Westborough for any amount of time, it’s a safe bet that you’ve met Nancy Yendriga. She has been at elections and Town Meetings, she’s registered marriage licenses and death certificates. Now, after two decades as Town Clerk, Yendriga is retiring and handing over the reins at the end of the month.

“It’s bitter-sweet,” Yendriga said in an interview at the Forbes Municipal Building. “It’s been an exciting job and I’ve enjoyed it. Meeting different people?that makes it fun.”

Yendriga was born in Quincy, lived for a while in California, and has been a Westborough resident for 36 years. She had experience as a ballot tabulator, and said she was hired 20 years ago by former Clerk Betty Amoroso after responding to a newspaper ad seeking an Assistant Town Clerk.

Yendriga was only the Assistant Town Clerk for two years before getting elected Town Clerk. Westborough voters have re-elected her for six consecutive terms since.

“I didn’t expect her to retire as quickly as she did,” Yendriga said of Amoroso. “I had dinner with her last night, so we’re still friends.”

Yendriga said she enjoyed the variety that comes with being a Town Clerk. “We do births, marriages, and death [certificates],” she said. “I follow you from birth to death.”

Yendriga said she is also a justice of the peace, and has officiated more than 300 weddings.

“It’s unique, and interesting, and the nicest thing I do,” she said.

Massachusetts became the first state in the union to issue marriage licenses to same-sex couples in 2004, and Yendriga soon found herself presiding over gay weddings.

She recalled that, when the decision to legalize gay marriage was handed down, some Massachusetts clerks said they wouldn’t marry gay couples. However, Yendriga said that “If you’re not willing to do it, you shouldn’t be a justice of the peace. It’s your marriage; I’m just there to officiate.”

Yendriga has seen other changes over the last 20 years, such as the increased computerization of record-keeping. She has also overseen at least one election a year as Clerk, conducted the annual town census, performed duties at Town Meeting and oversaw the Town Clerk’s Office.

The Town Clerk is the only full-time employee of Westborough who is elected. The Clerk is elected to a three-year term.

She said she will miss the town’s people, as well as her employees at the Clerk’s office, the people who work at Town Hall, and the friendships she’s made with other Massachusetts town clerks.

Assistant Town Clerk Wendy Mickle will take over in an interim capacity after Yendriga’s retirement becomes official Dec. 31. Mickle said she plans to run for election for a full term in March.

Mickle, who grew up in Westborough, was hired by Yendriga 18 years ago, and said she’s ready to become Town Clerk.

As far as what’s next for Yendriga, the outgoing Clerk said: “I plan to just go home. I think I’m goin