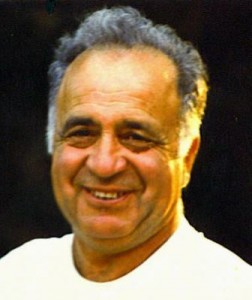 He was predeceased by his loving wife, Sylvia (Pakkala), and his sister, Eleanor Martin. He is mourned by his sons, John A. Scala Jr. and his wife, RoseMary Scala (DiVerdi), of Worcester, Joseph L. Scala and his wife, Marlene (Robert), of Shrewsbury, and by his daughter, Christine Mattson and her husband, John, of Holden; his nine grandchildren, Nicholas Scala and his wife, Katrina (Loughlin), of Worcester, John Scala III of Shrewsbury, Rocco Scala and his fiancée, Carly Ouimette, of Dennis, Gaetano Scala and Geno Scala of Worcester, Kristin (Scala) Lambert and her husband, Joseph, of Providence, R.I., Joseph Scala Jr. and his fiancée, Ashley Patry, of Shrewsbury, and Robert Scala and Michael Scala of Shrewsbury; his two great-grandchildren, Nicholas Scala Jr. and Lydia Scala; and by his nieces, nephews, and cousins. John is also mourned by his companion, Mickelina Kozlowski; her children and grandchildren; and the family's long-time friend, Harriet Durling Kaplan of Charlottesville, Va.

Born Oct. 10, 1920 in Worcester, John and his sister, Eleanor (Martin), were raised by their dear mother and father, the late Aniello and Philomena (Bovenzi) Scala of Italy, and by his beloved grandfather, the late John Bovenzi of Sorento, Italy.

John was a member of “The Greatest Generation” in every sense of the term. He was shaped by the Great Depression and attended Worcester Trade School, but left early to work as a mason and help support the family. He proudly served his country in the U.S. Navy during World War II as “bosun” on the USS Wakefield AP-21, making many transatlantic crossings. He served in the European and Asian Theaters.

John returned home from the war and traveled the Northeast, going to wherever the work would take him. He eventually settled down in Shrewsbury, where he devoted his life and work to his wife and family. He worked tirelessly to provide for his family, building the family home in Shrewsbury, two cottages in Hyannis, and the home he and his wife built in Dennis. He was president of Buccico and Scala Mason Contractors from 1968 until his retirement.

John was known as “Papa” to his family. The influence he had on his family was great and far-reaching. His stories of the Great Depression and World War II were priceless, and, undoubtedly, many of them will be told and retold, passed down from generation to generation. Papa was an avid fisherman with an obsession for the prized Bluefin tuna. The entire family spent many years on Papa's beloved Cape Cod in the homes he built for them, first in Hyannis and then Dennis.

The family would like to extend their deepest appreciation to the staff of Shrewsbury Nursing Home and Rehabilitation and Jewish Hospice Health Care for their care of John during his recent illness. They would also like to thank Charlene who brightened up every day for him at another rehab facility.

Relatives and friends are invited to visit with Mr. Scala's family Friday, Jan. 3, from 4 – 7 p.m., in Britton-Shrewsbury Funeral Home, 648 Main St., Shrewsbury. His funeral will be from the funeral home Saturday, Jan. 4, with a funeral Mass at 10 a.m. in Saint Mary's Church, 640 Main St., Shrewsbury. Burial with military honors will be in Saint John Cemetery of Worcester.