Southborough – The Southborough Community Emergency Response Team (CERT) and Medical Reserve Corps (MRC) is a group of volunteers in the process of restructuring its chain of command.

“The restructuring will divide the team into separate groups regarding authority,” Willoughby explained. “Southborough CERT/MRC came together as a team in 2006. Both units will still work together as one cohesive team, but the authority will be separated. CERT and MRC are two separate entities that work for the same causes. As it was before, CERT is under the Fire Department and MRC is under the Board of Health.” 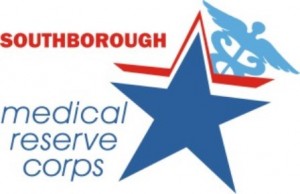 The unified mission of the Southborough CERT/MRC is to educate and train volunteers in emergency preparedness, readiness, response and recovery, as well as public health preparedness and response. They also recruit medical and non-medical volunteers who are willing to train and assist with mass care, large-scale incidents, and disasters.

“We'se going to offer a lot more training,” Willoughby noted. “I do a PowerPoint presentation on emergency preparedness for our volunteers.”

In addition to current and new volunteers, she hopes to offer the PowerPoint presentation to businesses and the general public.

“In 2007, when we had severe thunderstorms, flooding and lightning strikes, a few of us were deployed to set up a trailer as an emergency operations center so the police and fire departments could work from there if necessary,” she said. “And I was deployed to go to the Senior Center with the police to calm down a lot of the elderly people who were there. They were frightened by the storm and couldn's get home.”

In 2009, the team and the board of health organized a dispensing site for H1N1 flu vaccinations.

“We were deployed to the Mass Pike for an emergency shutdown in 2010,” Willoughby said. “Bricks had fallen off the bridge and we helped with traffic and safety.”

Among their other recent accomplishments were the openings of a cooling center during the heat wave of 2011; a shelter during Tropical Storm Irene in 2011; and an emergency operations center for Hurricane Sandy in 2012.

These volunteers have become familiar faces at annual community events as they assist with first aid and traffic detail at road races, Southborough Summer Nights, and the Southborough Heritage Day Celebration.

“We love helping our community,” Willoughby said. “The events run more smoothly having us out there and assisting the police department.”

She estimates they currently have about 40 volunteers, half of whom are active participants.

“We'se looking for new members,” she said. “It's a strictly volunteer situation. They don's need to be deployed if they don's want to be deployed. The members who are active are always available and there for us – from the road races to a weather incident. The others are nurses and physicians who would be there if we had a large-scale incident and really needed them.”

Also, plans are underway to establish a Teen CERT for freshmen through seniors, which will be coordinated by Sherri Lajeunesse.

For more information and an application to volunteer, visit southboroughcertmrc.org.

AMSA students celebrate their next chapter during graduation