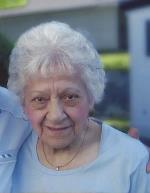 Hudson – Elizabeth Rose “Betty” (Davidian) Caponi, 97, of Hudson, died peacefully Tuesday, Jan. 28, 2014 at Beaumont Rehabilitation and Skilled Nursing Center in Northborough after a period of declining health. She is survived by her husband of 65 years, Felix Caponi of Hudson.

Betty was born in Worcester, daughter of the late David and Rose (Kaprelian) Davidian. She was raised in Northborough where she attended local schools. She was employed for many years by the Lance Corp. in Hudson until her retirement. She was an active member and volunteer at the Hudson Senior Center and life member of the V.F.W. Ladies Auxiliary in Hudson. She was a member of Saint Michael's Parish in Hudson.

Betty enjoyed playing cards and bingo in her spare time. She was an avid Red Sox Fan and enjoyed traveling throughout the states and Canada. She always cherished the trip she took with her husband Felix across the continental United States in their automobile.

Donations in memory of Betty may be made to the Resident Activity Fund, c/o Beaumont at Northborough, 238 West Main St., Northborough, MA 01532.