What are your earliest hockey memories?

“I first started playing in kindergarten. Before that, I was a dancer, and a figure skater, so I was a little reluctant to put on the pads. I played house league at the Buffone [Skating Arena] in Worcester. I was one of the only girls on the team, but I loved playing from the start. I still remember how excited I was to step on the ice every weekend for games and practices.”

Your first game for Shrewsbury High was in seventh grade. What was it like to be playing high school hockey at such a young age?

“It was a very different experience. I was skating with girls that were five years older than me, including my sister, Alyssa. Going into the first practice, I was put on defense, despite always playing offense. (I's back on offense this season.) It was definitely a unique experience, because we had girls from 7th to 12th grade, as well as girls who had never skated before. One of my favorite things about the team since I first joined has been watching everybody improve. It's incredible to see how quickly some players can develop.”

Which coach has really encouraged you to succeed?

“My dad was always my coach growing up, and he taught me countless lessons in hockey, and in life. We would talk about games, watch the Bruins, and spend time shooting on the net outside. My two high school coaches, Frank Panarelli and Ray Monroe, have also had a huge impact on my game. They have taught me to have confidence in myself, no matter what position I's playing. They have been supportive of me in my hockey career, as well as with my other sports and academics.”

Which teammate has it been the easiest to relate with?

“I'se been able to best relate with my sister Alyssa. I was fortunate enough to be able to play with her during my first year on the team, when she was a senior. On and off the ice, she is someone I'se always looked up to, and being able to play with her was an experience I will never forget. She is an amazing leader, as well as a very skilled player, and a role model that I will continue to look up to. She introduced me to ice hockey, field hockey and lacrosse, and her success in all three has pushed me to become the athlete I am today. She just finished her final season playing field hockey at UMASS Amherst, and her hard work has been motivating me over the years. Though we only had one season together, she has continued to be one of my biggest supporters, coming to any games she can, and cheering the team and I on.”

Which single game has been the most special, and why?

“In eighth grade, we were playing against Beverley in the playoffs. I had not put the puck in the net all season, and we had gone through double overtime, and were about to start a shootout. The shootout was in the seventh round, when I finally got my chance to shoot. Nobody had scored yet, and I was able to put the puck in the net. It was an amazing feeling to score the game-winner, and to push the team into the quarterfinals.”

What do you consider to be the best part of your game on the ice?

“I think my awareness and vision have helped me become a better player. Over the years, I have played every position, even goalie. Having that kind of experience helps a lot.”

Who are your favorite professional hockey team and player?

“My favorite pro team is the Bruins, and my favorite player is forward Patrice Bergeron. He's been on the team as long as I can remember, and he's always playing with a purpose. He may not lead the league in scoring, but he's a team player, and it shows every time he steps onto the ice.”

What is your favorite class in school?

“My favorite class is biology. I love learning about the way living organisms function, and seeing everything come together. There's always something new to learn, so you'se never bored.”

You'se only a junior at Shrewsbury High, but have you considered playing hockey in college?

“I love playing ice hockey, but I will not be playing in college. I have verbally committed to play field hockey at the College of the Holy Cross, and could not be more excited.”

What kind of legacy would you like to leave behind at Shrewsbury High?

“I hope to leave behind the legacy of being a leader, not only for the ice hockey team, but also in field hockey and lacrosse. Being part of a team has always been a big part of who I am, and that's one thing I want to be remembered for. I hope that after I leave SHS, the field hockey, ice hockey, and lacrosse programs continue to succeed, as they have while I'se been here. Lastly, I want to be remembered not only as an athlete, but also as a Colonial super fan.” 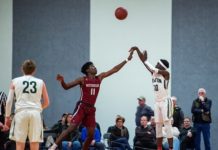