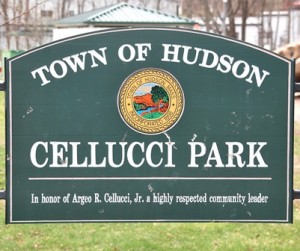 Hudson – Cellucci Park opened in 2008 as the culmination of five years of work and a cost of over $1.4 million. Residents and visitors of all ages now consider it a good investment for downtown Hudson.

Prior to its opening, half of the space was owned by a local business and became an abandoned lot. The other half was town property known as South Street Park, described as “an underutilized area” by Linda Ghiloni, director of recreation.

“It was a small park with nothing there other than a bocce court,” she said.

Funding was available for renovations because of the property's proximity to the Assabet River.

“It was done through a Community Development Block Grant,” Ghiloni explained. “It was recommended from the Urban River Visioning Initiative that the town was involved in to beautify and use areas along the Assabet River, especially downtown.”

Additional funding was provided by the town and private donations.

The bocce court did get used in South Street Park and remains in the redesigned location.

“Argeo Cellucci Jr. and some of his friends used the bocce court, and it's still maintained,” Ghiloni said.

The park is named after Argeo R. Cellucci Jr., who chaired the Hudson Economic Development Commission for 39 years. Among the dignitaries who attended the park's dedication ceremony in June 2008 was his son, the late Argeo Paul Cellucci, former Massachusetts governor and ambassador to Canada.

Cellucci Park was specifically designed with features for every age group. Perhaps the most utilized area is the splash pad, which operates throughout the summer from 9 a.m. to 7 p.m.

“It has a reclamation system, which enables us to run it even during times when we have a water ban,” Ghiloni noted.

Another popular feature is the sculpted in-ground skateboard park, which is the result of much research.

“We had several design companies come out and give us information before we decided what we were going to do there,” Ghiloni said. “It's concrete, so it's much more manageable and easy to maintain than just ramps.”

A gazebo serves as the stage for a free entertainment series, presented Thursdays at noon. Featured in this summer's lineup of family-friendly performers are Vic and Sticks, June 26; Rick Goldin. July 17; and Mister Vic, Aug. 7.

In recent years, most activities relocated from Main to South streets for the Hudson Community Fest. Cellucci Park has become the event's hub with live entertainment, vendors and representatives of nonprofit organizations. The opening of the splash pad is scheduled to coincide with the 28th annual Hudson Community Fest to be held Saturday, June 7, 9 a.m. to 3:30 p.m.

Ghiloni is among the Hudson residents who appreciates the 2.8-acre Cellucci Park.

“Now, the park is very much utilized,” she said. “It's a really pretty area in our downtown.”