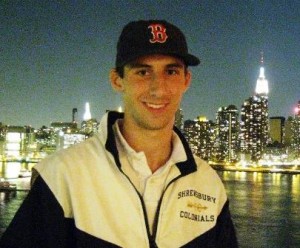 Shrewsbury – He stood on the Shrewsbury Common the day after the election, holding high one of his campaign signs, which now had “Thank You!” written across it, waving to all passersby and smiling. Even though John Medlinskas had lost his race for a seat on the Shrewsbury Housing Authority, the 19-year-old Shrewsbury resident and political science major wasn’t the least bit discouraged.

“It was a win in my book,” Medlinskas remarked cheerfully, in a phone interview shortly after the election. He had lost to long-time incumbent Paul Campaniello by a less than 10-percent margin.

“People came out of their houses, and said ‘we’re so excited about how well you did,'” Medlinskas said. “I’m happy and thrilled that people are so excited.”

His passion for politics can actually be linked to another loss by a far narrower margin. Beth Medlinskas, John's mother, remembers that time well. It was her son's first-ever election: running for Student Council in fourth grade. He lost by two votes. But it was that elementary school race that ignited Medlinskas’ interest in politics, much to the surprise of his parents, neither of whom view themselves as politically inclined.

“We vote, but that's about it,” admits his mother.

No matter whether it was a win or a loss, the recent election for the Housing Authority seat will add to Medlinskas’ steadily growing political experience. He has already served as one of the youngest Town Meeting members, a position he won by two only votes.

When running for the Housing Authority seat, he thoroughly researched Shrewsbury housing issues to ensure that he would be prepared for his potential responsibilities. He acknowledged that he had a lot to learn but wanted to give back to his town in a way that would make a notable difference.

“I love Shrewsbury,” Medlinskas remarked. “But I feel that public housing is isolated from the town and that's not how it should be… It should be one big community.”

During his campaign, Medlinskas worked hard to establish a personal connection with his constituents, spending?Fridays and weekends going door to door to introduce himself to Shrewsbury residents and discuss with them their ideas and concerns for the town. Residents seemed appreciative of his visits, even when he occasionally showed up at their door as late as 9 p.m.

“John can talk to anyone,” his mother laughed. She recalled how, even when he was a young child, he knew how to make people feel valued. She would take him shopping and he would politely address the store clerks by the name he had read off their name tags.

Yet, despite his efforts, Medlinskas feels that future elections would be improved by an increase in the awareness of the general public about him and his campaign goals. Next year, he is planning to have a committee of his top supporters to help him do just that.

But otherwise, Medlinskas asserted, he wouldn’t do anything differently.

“I will still go door to door,” he promised.

The seat on the Housing Authority would have been, for Medlinskas, another stepping stone toward what he hopes will be a long political career, in which he would one day like to run as selectman. But there will always be another election and, for Medlinskas, youth and time are certainly on his side.

His mother definitely thinks he will continue on the political path he has begun.