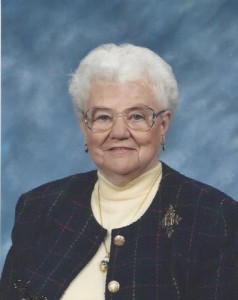 Ruth was born in Boston, daughter of the late Everett and Grace (Shaughnessy) Garvey. She was raised in Allston, where she attended local schools. She resided in Hudson for many years prior to settling in Berlin the past 23 years.

She was employed by the Raytheon Co. in Wayland for many years until her retirement. She was an active member of Saint Joseph the Good Provider Parish in Berlin, volunteering at the annual church fair and participating in the many other church activities throughout the year.

Ruth enjoyed knitting, sewing and crocheting in her spare time. She always looked forward to and cherished the times she spent with her family. Her loving and inspiring spirit will be missed by all her family.

She is survived by her son, Thomas Hellen and his wife Mary Ann of Somerville and their two daughters, Amanda Hellen of Somerville and Meredith Dziuba and her husband Ted of Malden; her son, Paul Hellen of Hudson; and her daughter, Diane Hellen of Pompano Beach, Fla. She was predeceased by her former husband and father of her children, Robert R. “Bangsy” Hellen, in 2011 and was the sister of the late Rita Capuano of Somerville.

A funeral Mass will be celebrated Tuesday, May 27, at 10 a.m., in St. Joseph the Good Provider Church, 52 West St. (Route 62), Berlin. Burial services will be held privately at a later date in Forestvale Cemetery of Hudson. Family and friends may attend calling hours Monday, May 26, from 4 – 7 p.m., at the Tighe-Hamilton Funeral Home, 50 Central St., Hudson.