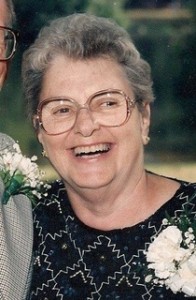 Marie was employed as a librarian for the Westborough Public Schools working at the Fales Elementary School for 25 years. She was a communicant of St. Luke the Evangelist Church, enjoyed knitting, playing bridge, and traveling.

Marie is survived by one daughter, Ann M. Lister and her husband Bob of Vineyard Haven; one son, James A. MacConnell and his wife Susan of Walnut Port, Penn.; a daughter-in-law, Deborah MacConnell of Rochdale; six grandchildren; seven great-grandchildren; and many nieces and nephews. She was the mother of the late Stephen A. MacConnell, who passed away in 2010, and sister of the late Francis Cross and Gerald Cross.

In lieu of flowers, donations in her memory may be made to the Alzheimer's Association, 480 Pleasant St., Watertown, MA 02472 or to St. Luke the Evangelist Church Memorial Fund, 70 West Main St., Westborough, MA 01581.