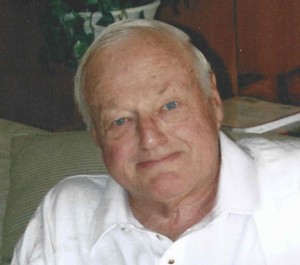 He is survived by his wife, Ruth E. Dyson née Hamley, of 57 years, and his children, Jennifer O”Toole and her husband Stephen of Westborough and James Dyson of Webster. He leaves three grandchildren, Jay, Brynne, and Julianne O”Toole, and is also survived by his sister, Marion Dyson of Auburn. He was predeceased by another sister, Carol Dyson Barbour.

Fran was born Jan. 17, 1929 in Worcester to Thomas Dyson and Mary (Plaza) Dyson. He graduated from South High in Worcester in 1947, and completed a post-graduate year at Worcester Academy before entering the College of the Holy Cross on a baseball and basketball scholarship in the fall of 1949. In his junior year, he was the starting first baseman for the Crusaders” record-setting baseball team that won the College World Series in 1952.

Upon graduating from Holy Cross in 1953, he enlisted in the U.S. Army and spent two years overseas serving in the Korean War. Upon discharge, he went on to complete advanced graduate studies from Boston University.

After retiring from Worcester State University, Fran served as the head softball coach at the College of the Holy Cross from 1993-1997. He was named Patriot League Coach of the year in 1995. He was recently inducted into the Holy Cross Athletic Hall of Fame.

Fran was a fine craftsman and enjoyed furniture making in his spare time. He was an avid golfer, enjoyed sports, travel, and spending time with his family and friends.

In lieu of flowers, memorial gifts may be made to the Worcester State Foundation, the Francis and Ruth Dyson Scholarship, 486 Chandler St., Worcester, MA 01602.

Relatives and friends are invited to attend visiting hours Tuesday, July 1, from 4-7 p.m., in the Britton-Wallace Funeral Home, 91 Central St., Auburn. His funeral will be held from the funeral home, with a Mass celebrated Wednesday, July 2, at 10 a.m., in the North American Martyrs Church, 8 Wyoma Dr., Auburn. Burial will follow in Worcester County Memorial Park in Paxton.