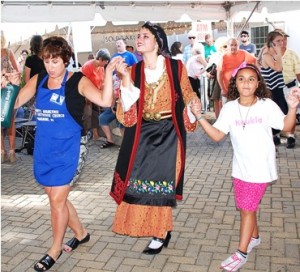 Marlborough – Heather Demos (left) and Katherine Lazouras, 7 (right), join a member of the dance troupe “Greek Pride of Rhode Island” after their performance Aug. 30, the first of the three-day ninth annual Grecian Festival held on the grounds of Sts. Anargyroi Greek Orthodox Church. Among the selections on an extensive menu prepared by volunteers were lamb and chicken kebobs, gyros, Greek salad and stuffed grape leaves, with baklava ice cream sundae for dessert. Proceeds from past festivals helped build the community center known as Hellenic Hall, which opened in 2011 following a fire in 2001.