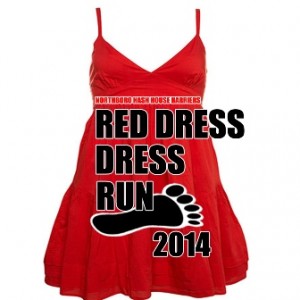 Northborough – In 2010, Al Del Re took a serious interest in running and has since completed 11 marathons and numerous other races. That same year he added more fun to his runs by founding the Northborough Hash House Harriers (NH3), a local chapter of an international, non-competitive running club. NH3 hosts at least one monthly run year-round.

“We always have a theme for every run – the Red Dress Run being the premiere event,” he noted.

NH3 is inviting runners and walkers of both genders to participate in its fourth annual Red Dress Run to be held Saturday, Sept. 27, noon to 3:30 p.m., beginning and ending at the Tavern in the Square in Northborough. The only requirements are that participants must be at least age 21 and follow the mandatory red dress code.

Del Re plans to don the same red dress he has worn for NH3's first three annual runs.

“I's proud to say that I still fit into it four years later,” he proclaimed. “I's never worn or owned a woman's dress until the very first run. I didn's know my size. I didn's know how to go about buying one. I ended up having to go to the dress shop to try on different dresses and figure what I could actually run in.”

“It really was an eye-opening experience to understand what women go through,” he shared. “And realizing how tightly fitting and revealing all these dresses are. It shows off every contour of your body and puts you completely on display.”

H3 globally declares it has no rules, only traditions. The Red Dress Run ritual began in 1987 when a newcomer in Long Beach, Calif., attended her first run attired in a red dress instead of running clothes.

There's an age requirement because the run includes drink stops for hydration with beer or water. Beer tends to be the beverage of choice.

“This helps keep it lighthearted and remind us that it's not a race,” Del Re explained. “We'se there to be sociable, to get some exercise and to have a few laughs.”

They'se also there to support worthy causes. Proceeds will go to two local charities: the Northborough Food Pantry, a source for supplemental food to those who are on a limited income or have an acute need; and the Northborough Helping Hands Association, a volunteer nonprofit organization that serves various needs of the town's residents.

However, it's not necessary for run participants to be from Northborough. NH3 members also hail from Hudson, Marlborough, Shrewsbury, Southborough, Westborough and surrounding communities.

While participants can prepare by shopping for a red dress, they can's practice the 5K run route beforehand because of another H3 custom. The lead runner, known as a hare, spontaneously marks the trail with baking flour or chalk for everyone to follow.

“The hare tries to makes the course not only surprising, but also challenging and unique in some way,” Del Re explained. “It's fun for the participants because you never know where you'se going.”

Whistles are provided for participants to stay in touch along the way, Del Re noted.

“Part of the fun is that we run together as a group,” he said. “It's not an individual contest at stake; it's a team sport.”

Registration is $30, which includes a T-shirt, whistle, and four tickets for beer or water. The maximum number of participants will be capped at 100, the capacity for the post-run party at the Tavern in the Square, 318 Main St.

For registration and other information, visit northboroh3.com.