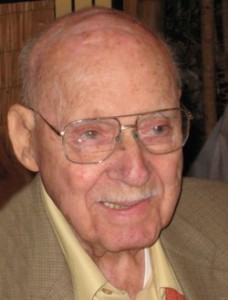 Michael was born in Worcester, one of five children of Italian immigrants Pasquale and Filomena (DiTerlizzi) DiPierro. He grew up in Worcester and graduated from North High School. In 1939, he married the love of his life, Ann, and for the next 70 years they had a special life together. They settled in Shrewsbury to live, work, and raise their family.

In 1946, Michael founded a successful tool and die company in Worcester; DiPierro Manufacturing, then later founded Bee Plastics in Shrewsbury, a major plastics manufacturer. He operated the companies and served as president for the next 21 years before retiring.

He was an early pioneer in the plastics industry, continually innovating and developing what was then a new process. He was instrumental in the development of the insulated plastic cooler chest and picnic jugs that are the still the standard of the industry today.

Later in life after retirement, Michael and Antonetta began to spend their winters in Florida and summers in Dennis Port on Cape Cod, before moving to Florida full time in 1972.

Michael’s dear wife Antonetta passed away Jan. 30, 2010. He is survived by his three cherished children, Michael A. DiPierro and his wife Jean of Naples, Fla., Paul DiPierro and his wife Rosemary of Shrewsbury, and Mariane DiPierro Pavelic and her husband Peter of Coconut Creek, Fla.; eight adored grandchildren; four great-grandchildren; a sister, Catherine Rossetti of Shrewsbury; and many nieces, nephews, extended family members, and friends. Three of his siblings, Lucretia, Ida, and Domenic predeceased him.

Michael was a lifelong boating enthusiast and golfer. He was a member and past commodore of Allen Harbor Yacht Club in Harwich Port, Coral RidgeYatch Club and the Landings Boat Club in Fort Lauderdale, Eastward Ho Country Club in Chatham and Coral Ridge Country Club of Florida.

Family was most important to Michael. He dedicated his entire life to his wife, children, and grandchildren. Their well-being and success was what made him who he was. He cherished the ability to watch his children and grandchildren grow and prosper. They were his life and he will be greatly missed.

Michael’s funeral will be held Monday, Nov. 3 from the Mercadante Funeral Home & Chapel, 370 Plantation St., Worcester, with a Celebration of Life Mass at 10 a.m. in St. Mary’s Church, 640 Main St., Shrewsbury. Burial will follow in Mountain View Cemetery. Friends and relatives are invited to visit with the family Sunday, Nov. 2, from 3-7 p.m., in the funeral home.

In lieu of flowers, memorial contributions in Michael’s name can be sent to the Vitas Hospice, 5420 Northwest 33rd Ave., Suite 100, Fort Lauderdale, FL 33309.