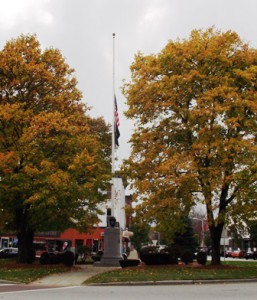 The bus will depart at 9:30 a.m. for Pine Grove Cemetery on South Street. Master of Ceremonies Denzil Drewry will introduce State Rep. Carolyn Dykema (D-Holliston) and the Board of Selectmen to present the wreath and Pastor John Taylor will give an invocation.

At 9:50 a.m., the bus departs for the Vietnam Memorial on Ruggles Street for services and wreath laying ceremony. Drewry will introduce Gold Star Mother Rita Lee and selectmen who will present the wreath. Father Jesse Abell will say a prayer.

At 10:10 a.m., the bus departs for Forbes Municipal Building, 45 W. Main St., for services and wreath laying ceremony. The emcee will introduce selectmen and dignitaries, including State Sen. Jamie Eldridge (D-Acton) and State Rep. Matthew Beaton (R-Shrewsbury). Grand Marshal Herbert Arnold will be introduced and Pastor Paul Sangree will say a prayer. The WHS consort will sing the national anthem.

Participants then may march or ride the bus to the Westborough rotary for services at 11 a.m.. At the rotary service, the emcee will introduce Pastor Mark Worth who will lead a prayer.

Three volleys of rifle fire by the VFW Post 9013 and the playing of “Taps” by WHS buglers Nick Schurr and Keri Larkin will conclude the ceremony at each monument.

Marlborough – Marlborough’s traditional Veterans Day parade will start at 10 a.m. in front of the American Legion on Maple Street. Participants may park at St. Mary’s Credit Union, 133 W. Main St., and are asked to meet at 9:30 a.m. The parade will then proceed along Main Street. Stops will be made at memorials along the route in honor of those who served, ending at the WWI Memorial, also known as “The Doughboy Monument.” Veterans Day ceremonies are coordinated by the Marlborough Veterans Council.

Shrewsbury – The Shrewsbury Veteran’s Council is sponsoring the annual town of Shrewsbury Veterans Day Service and Observance Tuesday, Nov.11 at 11 a.m. The Service is held at the World War I Memorial in front of Beal School, 1 Maple Ave.

There is limited parking behind Beal School; additional parking is available at the Public Library on Main Street, the Sumner House on Church Road, or the Town Hall on Maple Avenue. Maple Avenue in front of Beal School and Haskell Road will be closed during the ceremony.

Light refreshments will be served after the service by the Friends of the Public Library inside Beal School.