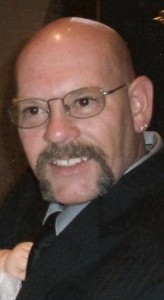 Ernie is survived by his wife and best friend, Kimberly A. (Laraia) McCallum-Belanger; two step-daughters, Amanda Lee Laflamme and her husband Joel of North Grafton, and Keri Lynn McCallum of Shrewsbury; two granddaughters, Sophia Laraia Laflamme and Sadie Jean Laflamme, both of North Grafton; a brother, William A. Belanger of Worcester and his children, William E. Belanger, Joseph M. Belanger, and Kimberly Handy and her husband Stephen; and several aunts and cousins.

He was born in Worcester, son of the late Ernest W. and Rita M. (Harmon) Belanger. He grew up in Shrewsbury, attended Worcester Central Catholic, and graduated from Shrewsbury High School. He later graduated from Worcester Vocational School.

Ernie worked for over 24 years at Saint Gobain in Worcester, where he started as a machinist and later became a hydraulics mechanic.

He was a member of Saint Anne’s Church, and the Building Traders Association. He loved motorcycles and purchased his first Harley when he was 18 years old. He enjoyed fishing in the ocean, going to the beach or simply sitting by the pool with an ice cold “Bud.” Ernie was a great guy and loved his family.

His family would like to thank Dr. Tony Samaha and all the nursing staff at Saint Vincent Hospital for their care and kindness that made Ernie and his family feel more at ease.

Calling hours for will be held Thursday, Dec. 4, from 4-7 p.m., at the Mercadante Funeral Home & Chapel, 370 Plantation St., Worcester. His funeral will be held Friday, Dec. 5 from the funeral home, with a Mass at 10 a.m. in Saint Anne’s Church, 120 Boston Turnpike Rd. (Route 9), Shrewsbury. Interment will be held privately in Saint John’s Cemetery of Worcester.

In lieu of flowers, donations in his memory may be made to the Oncology Department in care of Reliant Medical Foundation, 100 Front St., 4th Floor, Worcester, MA 01608.