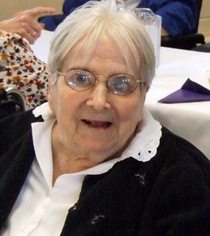 Sister Bernadette was born in Ludlow, and was the third child of five born to Joseph and Justine Lavoie. She graduated from the former St. Anne Academy (Marlborough) and earned a BA degree in Education from Anna Maria College and an MA in Religious Guidance from Providence College. Sister Bernadette joined the Sisters of St. Anne in 1938 and pronounced vows in 1940. For almost all of the next 20 years, she taught in high schools in the Montreal area staffed by the Sisters of St. Anne.

Sister Bernadette returned to the United States to Marlborough, where she served as a directress of women studying to become Sisters of St. Anne. She then taught Theology, Latin, and French at Anna Maria College. Retiring from teaching, she became an integral part of the spiritual ministry programs of the former Esther House for Spiritual Renewal in Worcester. In addition, she participated in the Sisters of St. Anne Social concerns committee and as a pastoral minister to the elderly in the neighboring Christ the King parish. The Worcester Office of Elder Affairs recognized her work with an Award for her many efforts to improve the lives of elderly in the city.

Sister Bernadette was predeceased by her sister and two brothers. She is survived by her brother and sister- in-law, Mr. and Mrs. Maurice Lavoie. She will be grieved by her family, nieces, and nephews, friends, and the Sisters of St. Anne.

Calling hours at the convent at 720 Boston Post Road E in Marlborough will be Wednesday, Feb. 11, from 2-4 p.m., followed by a prayer service in the chapel. The funeral liturgy will be celebrated Thursday, Feb. 12, at 10 a.m., in the convent chapel. Burial will be in St. Mary Cemetery, Beach Street, Marlborough. Funeral arrangements are under the direction of Fitzgerald & Collins Funeral Home (www.CollinsFuneral.com) of Marlborough.

Memorial donations can be made in Sr. Lavoie’s name to the Sisters of St. Anne (Marlborough) or to a charity of your choice.