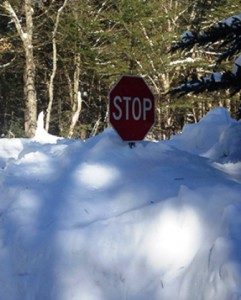 Region – We have yet another disturbance heading our way but this one looks like only a glancing blow for central Massachusetts. After a beautiful but very cold day, the Shrewsbury area will see clouds increase during the later portion of the evening. The cloud cover will help to cut radiational cooling off and we will not reach any outrageous cold by morning, with low temperatures of about zero in most places. Light snow will break out around dawn tomorrow. The light snow or flurries will continue into the afternoon, but with relatively small accumulations expected, especially when compared to accumulations we have become accustomed to. Likely accumulations in the vicinity of the Route 2 corridor look to be around two inches; in the general Shrewsbury area about two to three inches can be expected and perhaps up to two to four inches in some locations near the Route 495 corridor and south of the Mass Pike. The Cape and Islands have the best chance of getting a plowable snowfall, with 3 to 6 inches possible on the outer Cape and Nantucket. Of course there are still the ever present wildcards in this…will a coastal front set up and where, and will the easterly flow off the ocean enhance precipitation on the east side of the Worcester hills? I don’t think either will be a real issue as far as central Massachusetts goes, but the South Shore and Cape accumulations could be enhanced just a bit.

The cold that has gripped the Shrewsbury area is unrelenting and will continue for the foreseeable future. Two days after recording -12.8 here, it was -6.7 this morning. Worcester Airport had -8 degrees. The lowest recorded high temperature for this date in Worcester is 12 degrees, and that record is in jeopardy today though today’s high temperature may reach a degree or two above that. On average, our daily temperatures range from a high of 35 to a low of 20, or an average of 27 for the day at this point in February. Yesterday at the Worcester Airport, the temperature averaged a meager 6 degrees, with a low of -7 just before midnight. With no end to the supply of arctic air in sight, we are on track to challenge or break the record for the coldest February since records have been kept, which is a little over 12 degrees below normal for the month. We are also within striking distance of the record for the coldest month for any month and the most snow in any winter season, though that one will likely need another big snowstorm to really mount a serious challenge to it.

The rest of the week should be pretty benign though cold, with more sub zero mornings coming up. The next chance for any snow will be over the coming weekend.