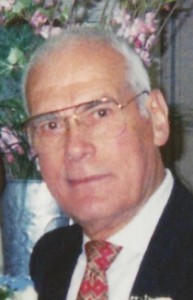 Westborough – Bruno Castelli, 97, of Westborough, formerly of Natick, passed away Saturday, Feb. 21, 2015 at the UMass Memorial Healthcare-University Hospital in Worcester. He was the husband of 63 years to Clementina “Dena” (Bianchi) Castelli.

Born in Richfield, Conn., he was the son of the late Adamo and Enrica (Giombetti) Castelli. He was educated in Framingham schools and attended Wentworth Institute and the Rhode Island School of Design.

Bruno was the owner and operator of Screwtron Engineering in Ashland, retiring in 1983.

He was a communicant of St. Luke the Evangelist Church in Westborough and a former member of St. Patrick’s Church, Natick. He was an avid golfer and enjoyed reading and traveling. He has been a resident of Westborough since 2013, previously living in Natick for 55 years.

In lieu of flowers, donations may be made to the Worcester County Food Bank, 474 Boston Tpke., Shrewsbury, MA 01545.