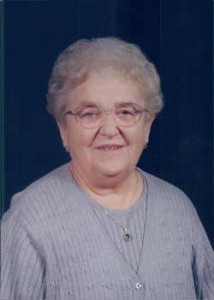 Lucia was one of six children born in Bisceglie province of Bari, Italy to Girolomo and Rosa (DiReda) Caggianelli. She was raised and educated in her native Bisceglie until 1946, when she married Luigi Piarulli, the man who she would spend the next 25 years happily in love with, raising their family. They began their life together in Bisceglie until 1963 when the family came to the United States, settling in Worcester. Lucia and Luigi continued to live in the city until 1971 when Luigi passed away unexpectedly. She then lived her life caring for her family until 2003, when she joined her daughter Rosa in Shrewsbury where she had lived ever since.

Lucia worked as a seamstress for the Rancroft and David Clark Companies before she accepted a position with the Worcester State hospital in 1970, a position she held for the next 15 years until retiring in 1985.

Lucia is survived by her devoted children, Rosa L. Lendall (Belsito), with whom she lived, Francesca Menzano and her husband Giuseppe of Worcester, Vincent Piarulli and his wife Mary of Oxford, and Gerald Piarulli and his wife Carol of Worcester; a sister, Maria Sfarzzetta in Italy; and 11 grandchildren whom she cherished and who cherished her, Silvio and Luigi Menzano, Luigi, Vincent, Joseph, Nicholas, and Michael Piarulli, Ashley Lendall, whom she helped raise, and Peter, Niko, and Christina Belisto. She had eight great-grandchildren and many nieces, nephews, and extended family members, both here and in Italy. Besides her husband Luigi, she was predeceased by a brother, Francesco; three sisters, Teresa Parise, Elesa Cassenelli and Vincenza Zingaro; and a son-in-law, Donald Belsito.

Lucia was a member of St. Mary’s Church. An accomplished seamstress, she loved to crochet and sew. Simple in life, she believed that family was the center of her life. A typical Italian mother, she loved to cook and bake, care for and take special interest in her husband, children and grandchildren’s well-being. Nothing was more important to her. Lucia also enjoyed walking, the occasional trips to the casino, traveling to see relatives and friends in Italy, helping in the garden and growing flowers.

Friends and relatives are invited to calling hours Tuesday, March 17, from 9-10:30 a.m., in the Mercadante Funeral Home & Chapel, 370 Plantation St., Worcester, followed by a procession to St Mary’s Church, 640 Main St., Shrewsbury, where her celebration of life funeral Mass will be held at 11 a.m. Burial next to her husband Luigi will follow in Notre Dame Cemetery

In lieu of flowers, memorial contributions in her name can be made to Summit Eldercare, 277 East Mountain St., Worcester, MA 01605.

The Piarulli family would like to thank Summit Eldercare and St. Vincent Hospital staffs for the care, compassion, and comfort they gave to Lucia during a difficult time.