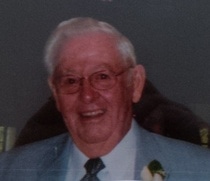 Westborough – Robert E. Grant, 90, of Westborough, passed away Friday, March 20, 2015 at the Beaumont Rehabilitation and Skilled Nursing Center in Westborough. He was the husband of Gladys E. (Mullins) Grant.

Born in Northampton, he was the son of the late George and Grace (Blanchette) Grant and was a graduate of Northampton High School. Robert also attended and graduated from the Stockbridge School of Agriculture in Amherst. During WW II he served with the U.S. Air Force.

Robert was employed for 24 years as the golf course supervisor and country club general manager at Brae Burn Country Club in West Newton. Prior to Brae Burn, he supervised the construction of the International Golf Course in Bolton.

Robert was a communicant of St. Luke the Evangelist Church, enjoyed golf, and had been a resident of Westborough since 2007, previously living in Grafton and Sudbury.

In addition to his wife, he is survived by his three children, Linda Knight and her husband Joe of E. Greenwich, R.I., Douglas Grant and his wife Lisa Erbin of Lexington, and Richard Grant and his wife Caroline of Westborough, and six grandchildren, Alexandra, Joe Robert, Abigail, Christopher, Jessica, and Andrew. He was the brother of the late George Grant and Kenneth Grant.

His funeral Mass will be celebrated Saturday, March 28, at 10 a.m., in St. Luke the Evangelist Church, 70 West Main St., Westborough. There are no calling hours.

In lieu of flowers, donations in his memory may be made to the Francis Ouimet Scholarship Fund, 300 Arnold Palmer Blvd., Norton, MA 02766 or at www.ouimet.org.